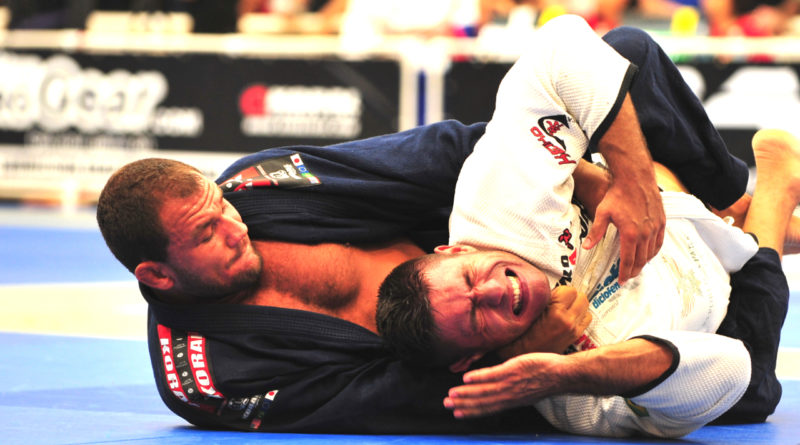 His palms are sweaty, knees weak, arms are heavy, there’s vomit on his Gi top – already…

The answer is obvious – NOTHING! Chill.

Almost everyone who enjoys grappling has gone through this and it is all normal.

The likelihood is this – you won’t warm up properly. So, you won’t be warm by the time you get on the mats. Events always seem to run late. And, to be honest, the likelihood is you WILL get choked out pretty quick. But its OK! If you are a white belt with zero tags on your belt, chances are you’re going to lose! It’s inevitable. If you’ve done something longer than me, I’d expect you to have the advantage.

The problem with this is people tend to put out videos where they win. I think its important to understand that losing is just as important (if not even more so) than winning.

No one expects you to go to your first ever competition at whatever level you are at and triumph on the first go.

The best thing to do is enter and commit to a competition. Then, all you have to do is go, turn up – have fun and make some new mates.

It’s easier said than done, but you have to turn up to these competitions for the art and not for the metal.

I used to put myself under so much pressure to win that I it seemed to have this negative counter reaction. I was up tight, bothered, stressed. When you feel like this mentally, your body knows it physically. The second I started to not give a crap – I mean genuinely not care about the outcome, not just a lip service – I started winning!

Maybe it was because I was more experienced, maybe it was because that’s how the system works, I’m not entirely sure. As soon as I started changing my perception on competitions and looked at it as “You’re either winning or learning” – then suddenly my jiu-jitsu became better.

Patience is a virtue in this game. The average Joe will take at least 8 years (AT LEAST!) to get to black belt status. Just commit to yourself, don’t rush each stripe on your belt and most importantly – GO and COMPETE!

I get that not everyone wants to and although I struggle with the concept of this – I get it.

By going to competitions, you learn how to deal with your anxiety, the stress that follows (someone is about to try and choke you out!) you learn your weak points, your strong points and best of all, you get to meet some real cool people and more than anything else you warrant the level you’re at. (If you get gold at every comp you enter – you warrant the promotion)

Personally, I believe competition is where you can really test your BJJ (or any other martial art or skill). Training without competing is like having a chef qualification, but never having cooked a meal. In my opinion, it’s pointless.

There are certain limitations like age which should be considered, perhaps medical problems, too, but if you are capable of competing then I would always encourage people to go do it.

What’s your thoughts on competition? Should everyone be made to do it? Is it a true reflection of your ability?

Me at the Dorset and Hants 2017 Open finally getting Golds in Light Feather (Adults) and Featherweight (Masters 1) Gi and Gold in the Featherwight (Masters 1) NoGi – It took a lot of no medals and a few bronzes to get there. Taking your time and not worrying will pay off – hang on in there!