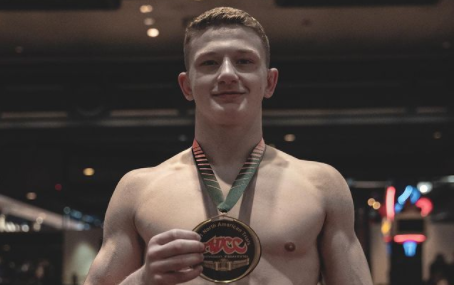 Cole Abate may be the 2021 breakout grappler of the year. Still just 16-years old and a blue belt, the Art of Jiu-Jitsu product has long been touted as one of the sport’s brightest prospect, but he fully arrived on the elite scene earlier this year when he defeated perennial top competitor Geo Martinez at the Who’s Number One Championships. Just a few short weeks later, Abate would win gold at the ADCC East Coast Trials, making him the youngest-ever Trials winnner.

On a recent episode of The Grappling Hour, Abate recapped his biggest wins at the ADCC Trials.

Estevan is a really great competitor. You see him fighting against some huge guys in the absolute. And one of his main attributes is being able to move and escape positions, and really just be dynamic the entire fight and force his opponents to get to positions that they’re not used to and defend attacks that are more unorthodox. With him, I knew I just really had to slow him down at the beginning and knowing that I was bigger than him, I would be stronger in the fight. And I knew that he was more comfortable when it was loose, when there was no engagement… So I really just had to lock him down, slow him down, make him tired, and feel my strength… I was just more aware in that fight and tried to really play it safe whenever it came to him getting free and jumping around. but I was able to take his back and score against him, as well.

The semifinals against Deandre Corbe, who had just upset top competitor Junny Ocasio:

Going into that match against Corbe, I knew he would be very strong, he’d be very physical… I would be moving on top and trying to pass the guard. I actually passed his guard before the points started… I was in the side control and went straight to knee on belly to score the points for that, just to solidify it. I let him recover the guard… so that I could pass again. I stayed moving on top. Towards the end of the fight I think he tried to stand up and take me down, but I just maintained good distance, kept my hips back and got the win with two points.

I think a lot of people counted him out in going to the finals… He was one of those guys that we were aware of since the beginning of the tournament… He’s got good wrestling, he’s got good leg locks, so you really have to be on your toes the whole fight… With it being the finals and you getting negatives for pulling guard, I really just wanted to feel out his wrestling… I felt his grips on the feet. He seemed very experienced on his feet, good wrestling, good level changes, good stances. So what I did is I was able to open up a shot. I got pretty deep on a single leg. But instead of taking the risk and going for the takedown right away… I used that as a chance to pull to my guard without taking a negative point… I was playing my guard for the first half of the match. Was able to get under his legs and sweep him and get on top. As soon as I got on top that was right when points started so I was like okay now it’s time to rack up points. So I passed pretty quickly as soon as I got on top. I was able to make him expose the back at one point, was able to get to the back… Was able to get to very dominant positions in that match and solidified my spot in ADCC next year.

The gold medal performance at the Trials secured Abate’s spot at the 2022 ADCC championships, where he’ll aim to be the youngest male competitor to ever win gold.