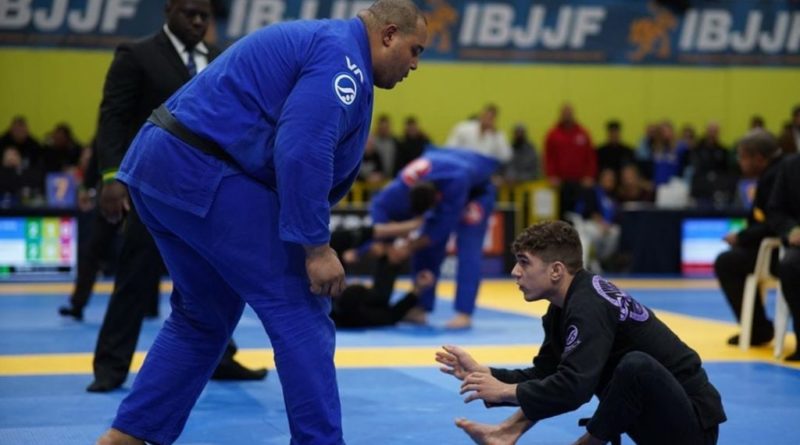 I absolutely love an entire round of having a 90kg guy pinning me in side control whilst I burn all of my energy trying to frame and get out – but escaping appears to be simply impossible – yet instead of letting me work, or even switching their own position/ go for a sub, just lie on top of me – it’s fine – I enjoy this kind of jiu jitsu – this is my favorite kind of jiu jitsu.

Getting Stuck Under the Big Guy

The heavier the opponent, the easier it is to get crushed under their weight. There is also the fact that they can literally pick you up and throw you, or force a submission with no technical skill requirements. The not so apparent dangers lie in getting stuck.

Getting stuck in matches with people similar to your build is frustrating enough, but getting yourself in a bad situation when you’re grappling someone who doubles your size is arguably one of the most frustrating situations in BJJ – plus, certain things you might usually do when you roll, have no place against the ultra heavyweights. Trying to mount a big guy? You are getting yeeted off!

Being 52kg (circa 115lbs) I am often the lightest person on the mats, and sometimes I find myself rolling with the bigger guys ranging in the 70kg-100kg+ realms – literally twice my body size. If these guys had to roll with someone twice their weight, their opponent would have to be 140kg-200kg+ which would be an incredibly rare opportunity.

Due to significant size differences, particularly for women, it is also knowing/ having to accept that half of what you know won’t be applicable to someone that much larger; whereas bigger opponents have the opposite problem – they are able to get away with certain things because their opponents are so much lighter, but they would probably have very little chance when trying to go for it on someone who is their own size.

When there is a size difference above 20kg that is essentially like a small woman rolling with a child. As a small woman, if I was rolling with a child who was an absolute wizz and was smashing me I wouldn’t begin slamming all of my body weight into them – A. because it is morally wrong and B. in case I seriously injured them. If you have a big weight advantage on your partner you should be doing everything in your power to not use your full strength – for health and safety reasons if nothing else – because who wants to be the reason why someone else can’t train for six months?

The main problem I find with the big guys who love to smash is the fact it is usually the bigger inexperienced guys full of testosterone who target the small women in the class to roll with, in hope that they will get the tap and please their own ego, and in the process of trying to get that tap, they end up slamming their weight somewhere and injuring you – especially if you are giving them a bit of a tough time – what are we supposed to do? Just tap every time you slam your weight? I’ll just avoid the roll thanks.

Know When/Where You Are Applying Your Weight

With newcomers they use their strength because they don’t have anything else, which is understandable. When you don’t have any technique to rely on, we will always rely on our next most reliable asset or attribute. For some it is strength or size, or flexibility and others, explosiveness/ speed. With time you will reach a point where you know where/how to apply your weight in order to be conscious of where/how NOT to apply your weight.

Big guys – roll with other big guys. Give yourself a taste of your own medicine. When you realize what it’s like, hopefully it will give you a greater perspective for when you roll with smaller opponents in the future.

Know How to Roll with Smaller Opponents

This article isn’t to bash every big guy that does jiu jitsu, some of my best rolls have been with guys who are much larger than me, and have given me a tough time without applying their full weight and trying to smash me. For example, they have given me way; allowed me to get certain entries and positions, and let me work, meanwhile they focus on their defense game rather than offense – making both of us benefit.

When I roll with women a few kg smaller than me I notice the weight difference and I don’t apply full pressure because there’s no need to. I can pin them without the need of extra strength, the same SHOULD go for bigger people wrestling smaller people in general. BJJ isn’t about winning – it is about learning. If you find yourself pinning someone down the whole round, unable to submit your opponent and them being unable to escape – what does either of you learn? The answer is – nothing (other than the fact you’re a bit of a d*ck).

If you find yourself trying to smash someone with all of your weight with the potential to unintentionally break something then ask yourself, “Why?” To prove a point? A point to your fragile ego. You can smash someone half your size? Congratulations! You are the best person in the gym! Embarrassing much?…