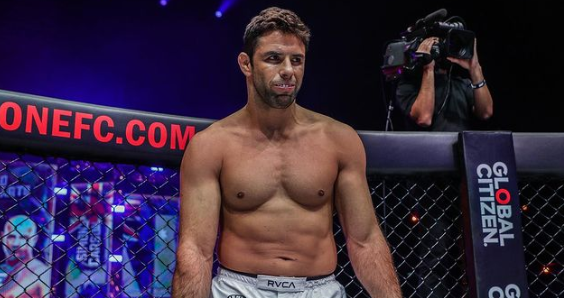 Marcus “Buchecha” Almeida spoke to Grappling Insider about his progression in MMA and his upcoming fight against Kirill Grishenko at ONE on Prime Video 1.

On Friday, August 26, Brazilian jiu-jitsu legend Marcus “Buchecha” Almeida will face the stiffest test of his still young MMA career when he takes on former ONE Championship interim title challenger Kirill Grishenko at ONE on Prime Video 1.

Just three fights deep into his budding MMA career, Almeida could easily find himself in a heavyweight title fight with a win over Grishenko.

And while fans and media alike have stated that Grishenko represents a significant step up in competition, Almeida is quick to point out that Grishenko doesn’t have much more MMA experience than himself.

“He’s won a lot of fights, just fought for the title, but he doesn’t have years of experience,” Almeida told Grappling Insider.

Grishenko is 5-1 as a professional in a career that dates back to October 2020. In comparison, “Buchecha” started his 3-0 MMA career in September 2021.

“Believe it or not, it’s weird to say, I used to get more nervous fighting the final of [IBJJF] Worlds Championship than fighting MMA,” he said. “It’s weird but I feel more calm now… I thought MMA would be really different, I’d be nervous a little bit more than usual, but it’s been totally opposite of that.”

Always humble, Almeida is only respectful toward Grishenko and his skills, referring to him as a “big challenge.” Grishenko, on the other hand, has criticized Almeida’s skillset, calling his striking “too basic, too slow.”

Almeida, though, has no interest in engaging in any type of trash talk.

“I don’t like this kind of thing,” Almeida said, “so I don’t care what the opponent says about me. At the end of the day, when the door of the cage closes, I want to do my job, he wants to do his job. I want to win, he wants to win. So whoever gets the job done first, got the fight planned better, is gonna get the win.

“At the end of the day we’re going there with the same goal. He’s not my enemy, I’m not his enemy, just opponents.”

Almeida’s goal in this fight and every fight is to not only win, but win by finish as quickly as possible.

“My goal is always to get the job done in the first round, so if I can get the submission, I will squeeze it as hard as I can to make him tap. But if not, I’m ready to fight against him for 15 minutes.”

“Buchecha” has yet to see a second round in his career, with two submission wins and one TKO.

Those quick finishes (Almeida has just about eight minutes of total cage time) could lead some fans to question his ability to fight into later rounds. But “Buchecha” came to MMA with a wealth of submission grappling competition experience, and that experience gives him confidence to fight beyond the first round.

“I don’t need to prove to anyone that I have cardio,” he said. “I have ADCC matches for 30 minutes. People know that if I need to, I’ll do it. My last ADCC final was 30 minutes. Of course, it’s a different sport, but I’m used to long fights.”

Even if the fight goes long, “Buchecha” won’t stop looking for a way to end it early. Whether the opening for the finish comes in the first minute or the last, Almeida’s entire approach to fighting is focused on the submission or knockout.

“It’s all about creating the right opportunity,” he said.

If “Buchecha” defeats Grishenko, he will have beaten the most recent ONE (interim) heavyweight title challenger. It would make sense, then, for “Buchecha” to expect a title shot with a win.

He refuses to look that far ahead.

Borrowing from his experience competing in jiu-jitsu, “Buchecha” knows that achieving championship goals takes time; there is no rushing the journey to the top.

“I have a lot of steps before I get there. That’s how I see it. When I was a blue belt, my dream wasn’t to be a black belt world champion, it was to be a blue belt world champion. So I think, take steps, step by step, so I don’t try to rush it. I want to win this fight. I want to do good, I want to show my best and show improvement, and then I think about my next step, but I don’t like to skip anything, any part of the process. Because I’m really enjoying [it], I’m having a good time. I’m learning every day, every sparring session I feel better. I feel like a complete MMA fighter, not just a grappler fighting inside the cage.”

With his prodigious accomplishments in grappling, “Buchecha” has nothing left to prove; he could easily retire from competition into a comfortable life of teaching and seminars. But like the true martial artist that he is, he has chosen to throw himself into the deep waters of a new sport.

For some, the transition from grappling to MMA might feel scary or risky. But for “Buchecha,” it was simply the natural next step in his journey as a martial artist.

“My life is all about challenges and [Grishenko’s] gonna be one more challenge of my career.”