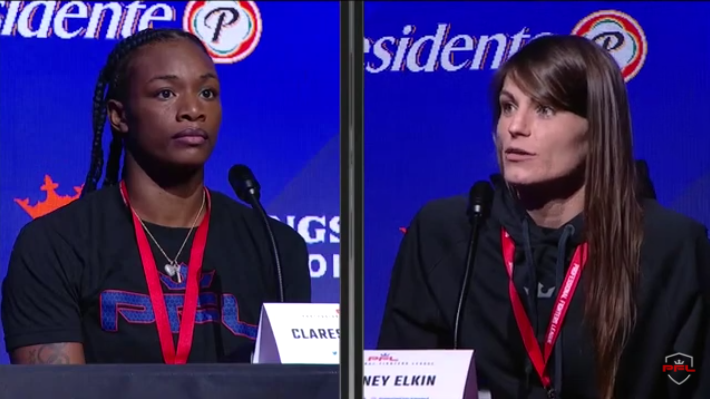 On Thursday, June 10, two-time Olympic boxing gold medalist Claressa Shields were make her much-anticipated MMA debut at PFL 4. For her first MMA contest, Shields will be squaring off with multiple-time Fight to Win veteran and active BJJ competitor, Brittney Elkin. At a pre-fight press conference on Tuesday, Shields didn’t mince her words about how she expects the fight to go down.

For her part, Elkin said that she plans to spring the upset with a second-round finish. Shields fired back.

“I want to tell Brittney that she doesn’t sound confident in nothing that she’s saying,” said a fired-up Shields. “First it was supposed to be 15 seconds, now it’s going to be the second round. Truth is, Brittney Elkin (is) gonna lose, period. I’ve been in training camp for seven months at the Jackson-Wink MMA camp, training with some heavy hitters. Arlene Blencowe, Holly Holm, Jonny Bones (Jones). I’ve put in a whole lot of time, and I didn’t come to the PFL just to have my beautiful record in boxing, and all my accomplishments derailed by somebody who is not even really a serious fighter…

“I’m an athlete,” Shield continued. “I’m a fighter and as much as anyone up here on this panel. I’m an MMA fighter like y’all. So don’t count me out just because Brittney has been in MMA for 12 years and hasn’t been great at anything except for jiu-jitsu. I’m an all-around great athlete, great person and I’m just getting ready to get in there and shutting up all this stuff about grapplers being able to beat boxers. I’m not just a (boxer), I’m an MMA fighter now. Just accept it.”

Indeed, in terms of MMA and grappling experience, Brittney Elkin far surpasses Claressa Shields. Elkin’s first amateur MMA bout took place in 2011, and since then, she has acquired a 3-6 professional record. Importantly, though, Elkin will be no stylistic pushover for the talented boxer; Elkin is a brown belt in jiu-jitsu and has legitimate grappling skill and has shared the mat with some of the best black belt competitors in the world, including Elisabeth Clay and Kendall Reusing.

Will Elkin be able to implement her grappling and spring the upset? She’ll have her chance in Thursday’s main event.

How to watch: PFL 4 takes place on Thursday, June 10, and will air live on ESPN.