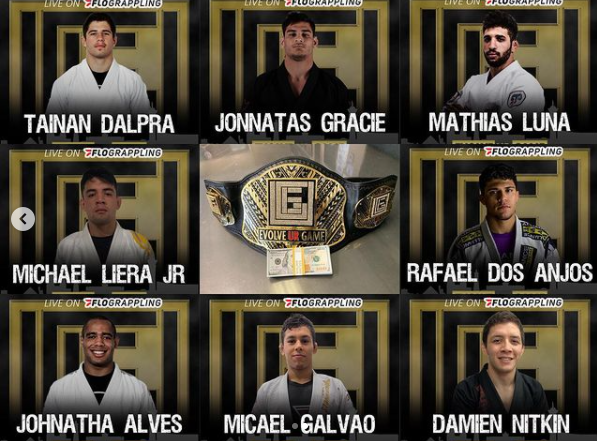 Evolve Ur Game Promotions (EUG) is set to return with its second event on Saturday, June 12, featuring an eight-man gi jiu-jitsu tournament with $10,000 on the line. The tournament is stacked with world champions, elite competitors, and some of the most promising young talents in all of jiu-jitsu. The card also features a number of intriguing super fights. Check out the full event line-up below, as well as a preview of the EUG 170-pound tournament.

Jonatha Alves vs. Michael Liera, Jr.: Top Art of Jiu-Jitsu competitor Jonatha Alves will put the gi on again after dropping a close decision to Oliver Taza at the last Who’s Number One. Atos black belt Michael Liera Jr. is a European Open champion and a veteran competitor, but he’ll have his hands full against Alves, who has shown very few holes in his game, particularly in the gi. Look for Alves to implement the trademark AOJ berimbolo game to rack up points against Liera. Alves has beaten Liera on points the last three times the pair met.

Jonnatas Gracie vs. Mathias Luna: Atos black belt Jonnatas Gracie is large for this tournament and is quietly one of the most dangerous competitors in the world. He holds a 2020 submission win over Luna and is coming off a decision win over Luna’s twin brother, Matheus. Gracie should be able to implement his tricky guard and sweeping game to keep Luna on the back foot for much of this match, perhaps securing another submission win over Luna. Gracie should be considered a dark horse, if not a favorite, to win the tournament.

Micael Galvao vs. Damien Nitkin: Filling in for Paulo Costa, Damien Nitkin will have his hands full against the uber-talented and uber-hyped brown belt Micael Galvao. After cruising through the 2021 no-gi Pans and impressing against Andrew Tackett at Who’s Number One, Galvao will put on the gi as he continues to make a real splash on the North American competition scene. Galvao appears to be very much the real deal, and will likely be a favorite to win the entire tournament.

How to watch: EUG 2 takes place on Saturday, June 12, and will air live on FloGrappling (subscription required).