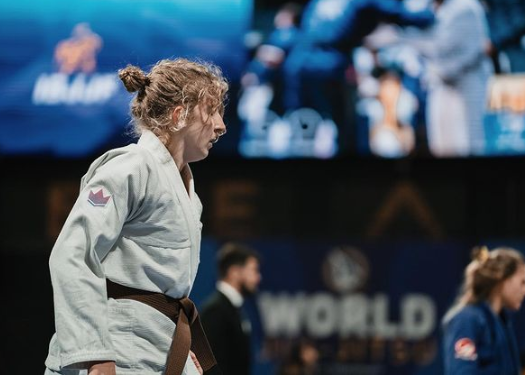 Brazilian Jiu Jitsu in the gym and using it in a competition are two very different things. There will be things you can’t prepare for, however, there will also be things you can prepare for. Emily Eyles, a Canadian Brown belt jiu jitsu athlete under Pedro Bessa, who trains out of Sweatbox in Bristol, England reveals some tips below for BJJ beginners when it comes to competing. Eyles is an incredibly active competitor and has had experience competing under multiple rulesets and has competed at IBJJF Worlds and Euros, AJP, Grapplefest, and ENYO.

Eyles is well-versed in mixed martial arts and has a background in Muay Thai, Boxing, Wrestling and Judo – where she was later introduced to Brazilian Jiu Jitsu, and has been training BJJ for around nine years. If they compete, most people usually have their first one a few months or even years into training, however Eyles took on the challenge within the first six weeks of BJJ training and has been competing ever since.

There are some very obvious pointers when it comes to preparing for an athletic competition, such as watching your weight/ what you eat (if you get put into certain weight brackets), making sure you are training enough, figuring out some sort of game plan, setting goals for training, and making sure you have the right equipment (Gi is legal etc) for example, however when it comes to weight cuts Eyles sees that as an unnecessary stressor especially at lower belts. She explains,

“If you’re competing, try not to cut weight, that is my first piece of advice. I think there are enough stressful things when you compete, that I don’t think you need to worry too much about your weight, especially lower belts.”

Even if you do have to make somewhat of a weight cut – if you want that donut, have the donut.

“You will have someone to compete against, unless you’re right on the border of super heavy for women and you need to lose a kilo or something – then do it – but if you need to lose like five kilos in a week it’s not easy to do unless you know how to do it. When I need to lose weight I reduce my intake, train a lot and cut down the sweets and other extra things that I enjoy in my life, but if I feel like having a donut or having bubble tea or something, I’ll still have it.”

When you are preparing for competition you also want to have some goals to strive towards in order to strengthen your game and make sure you are ready for what comes at you. Eyles says,

“I usually set goals before competing and try to train towards those goals. If I want to play a more aggressive guard, I’ll play more guard in training and I will seek out people to roll with who can help me to achieve those goals. Obviously same gender, or same size, but that can be harder.”

Making Mistakes Comes with the Game

In jiu jitsu the phrase is “you either win, or you learn” and you definitely won’t win every time. Sometimes a loss in a match can be a real kick to the ego especially if you get annihilated, but you need to focus on the positives – no matter how small.

“If you’re always competing you’re always kind of preparing and you don’t have as much time to dwell on the mistakes you’ve made. I think it’s good to look at the things you’ve done wrong – you can always do something wrong and win (as well) – and not to see them as a moral failure – it doesn’t mean you’re bad at jiu jitsu, it’s just something you need to improve on.”

Like all BJJ competitors, Eyles has won some and she has lost some – it comes with the territory. She explains,

“Winning is great. I feel like I win a lot less than I would like to, but that is ok. I think when you lose you have to give yourself time to process it emotionally, especially if it was a hard loss. I have to think about what I did well when I lose, it can be something really small. Sometimes you lose and you get completely squished and you don’t think you did anything well; but maybe you stayed really composed, maybe you kept your guard, maybe you just had a good attitude, maybe you felt good even though you lost.”

She continues, “You need to find something good because if you look for bad things you will just feel bad. You have to be specific when you’re looking for bad things, they have to be attainable. I find with jiu jitsu, ‘wanting to get better’ is a large goal so you need to break it down. For example, I lost a no-gi match because I came up and sat down to do a leg lock and my leg finishes aren’t that good. I lost that match. I did the same thing in London, so the improvement for me was don’t sit down, and fix my finishes (which you can break down into smaller goals).”

You always hear “be first!” being shouted from the sidelines at competitions and there is a good reason for it. Usually, if you determine the pace of the match that usually leads to you being able to play your game instead of the opponents, often leading to a successful outcome.

“If you determine the tempo you are usually the one who will do well in the match. I try to set that tempo in my brain by walking, some people dance which is fun. I try not to overthink what I’m going to be doing.”

Do I Need a Game Plan?

Game plans aren’t helpful for everybody. Some people work better with a firm structure, others don’t. You must figure out what works best for you in due time. Eyles states,

“Game plans don’t really work for me, they work for others because some people need that structure. They need an answer to every question – like if your opponent is doing a certain technique, you need an answer for that. I just plan what my first move is going to be and then from there hopefully there is something to everything they are doing. What is the worst that can happen if you try? If someone thinks bad about you because you competed, it is more reflective of them. No one will remember.”

Setting goals in training will help you get to where you want to be in both competition and jiu jitsu, Eyles expands,