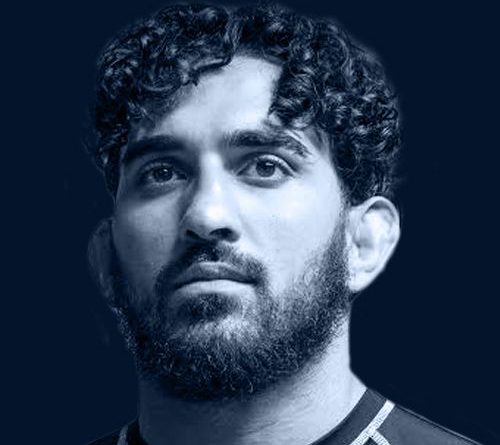 Edwin Najmi faces off against Mansher ‘Munch’ Khera at Polaris 11 for the welterweight belt. We caught up with Edwin to see how prep was going for the match.

Hey Edwin, what’s up? How’s England treating you?
Yeah man, really good. Been here a couple of times, always good. There are a lot of Gracie Barras out here, and they always treat me like family. My buddy was having a bachelor party in London –
couldn’t do anything but I was happy to go down and support.

How was the weight cut?
All good, back up like 10lbs heavier. I cut like 12lbs in the last three days since I got here. I was pretty heavy when I got here, but it was pretty easy. I’m used to it, done it like twenty times now, can’t really complain.

So, Polaris, tell me how you’re feeling?
Feeling good man. I took it late notice, but I kept hitting up Polaris on Instagram; I kept saying ‘you need me on your show, you need me on your show, these guys are boring’. Vagner got hurt and they hit me up, so it was a no brainer, especially for the belt. I feel in really good shape, competing
every other weekend, training for ADCC, I’m in the best shape of my life.

What does Polaris mean for you?
It’s really cool, I’ve never fought UK before. It’s always great going for a new event, and I’m really looking to stack those championship belts up. It’s definitely a big deal, kinda feels like Pride back in the day. I was talking to Ben (the Polaris founder) who said he was a really big fan, and I can
definitely see where the inspiration comes from with the stage, and the posters and everything. It’s definitely a big deal.

How about the match up against Mansher?
Mansher is really good, a well-rounded, calculated guy, tight on positions. I don’t know, maybe I’ll let him dump me on my head, tire him out a little bit, and then start scrambling from there. He’s a really nice guy though, one of the guys I respect.

It’s not the first time you’ve faced him, is it?
No, I fought him at brown belt, at the gi Pan-Ams, but it doesn’t really count. It’s like anything before black belt doesn’t really count. It was maybe four years ago, and brown belt to black belt, so it’s like everything you did gets erased. It’s like, ‘who cares?’, it’s nothing compared to what you do at black belt. No gi is a little different because there are no belts, but yeah, I’m not thinking about that match at all. Munch is a cool guy though, I like hanging out with him.

What should we expect from you tomorrow night?
I don’t know what to expect, but I know it’s going to be a good fight. I’m ready to fight for fifteen minutes, even if I do need to pace myself a little bit. It’s hard to go hard for that long – I’ve fought long fights before, and it isn’t easy, it’s going to be fun though. I don’t really like to think about the fight at all, I just visualize winning, but I don’t think what I’m going to do in the fight. It’s going to be a good one for sure.

Alright man, well best of luck tomorrow night, I hope you smash it.

Make sure you check out the fight on UFC fightpass, and keep an eye out on GrapplingInsider.com for the rest of the interview coming up soon. My other work can be found on https://thoughtsonfighting.wordpress.com/ if you want more of my ramblings.