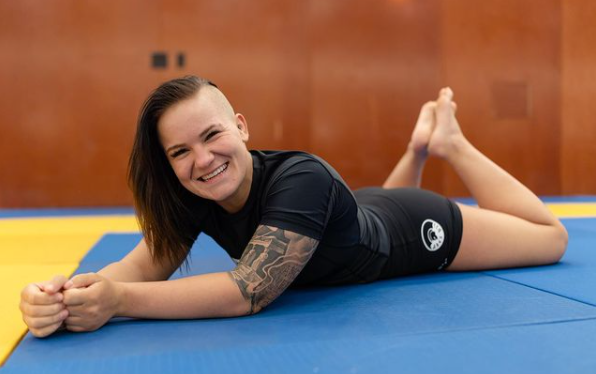 At the 2021 no-gi Pans, Elisabeth Clay put on what might have been the most dominant performance of not only the weekend, but the entire year so far. Clay secured six submission wins in as many matches to win both her weight and the absolute division, and she did it all on what she believes was a torn MCL.

“I hadn’t trained for two weeks before no gi Pans because of my knee,” Clay told Grappling Insider.

“I went to someone and they wanted me to get an MRI because they think I tore my knee. I told them ‘no’ because I’m not getting surgery. I’m pretty sure I tore my MCL.”

Understandably, the injury gave Clay’s coaches pause. If she can’t train, should she be competing? Discussions took place, but ultimately, the competitive-minded (and headstrong) Clay couldn’t pass up the opportunity before her at the no-gi Pans.

It was recommended to me to probably not do the competition, and if I was going to do it, to be careful. I hadn’t decided completely that I was going to compete until about two days prior when I was already there. And I was only supposed to do weight, so I had agreed with my coaches that I was only going to compete weight and not absolute. And then when I got there, I ended up deciding to go ahead and compete in the absolute. I was already out there competing so I decided I might as well.”

“I had even told some of the people working the tournament that I know, that are friends, ‘I’m not competing absolute, I’m only doing weight. My knee is pretty messed up right now.’ And then when I was coming back for open weight, they were like, ‘I thought you were only doing weight…’ ‘Yeah, you know me, I lied. You know I can’t not do it.”

Torn MCL or not, Clay performed spectacularly, particularly considering she it was her first time competing as a black belt in a major tournament. After submitting Bridget Mceliese to win the medium-heavy division, she tore through the absolute division, ultimately tapping fellow no-gi Pans champion Kendall Reusing in the finals with a beautiful reverse armbar.

It’s a tournament performance that ranks alongside her 2019 brown belt double-gold performance at the no-gi Worlds, says Clay.

Clay credits her performance at no-gi Pans to the years of training she had put in leading up to that point. For her, there is no magic competition trick; it’s just work.

“Obviously I still have bad days, but I try to make sure those bad days are in training and not in competitions. I think it’s just through the years of working out all the kinks and the mental side of it so that when I go to compete, even when I’m hurt… it’s just like I’m gonna do it… The biggest thing is I’m just gonna do it, no matter what, I’m putting myself out there.”

The knee is slowly healing, but Clay has no intention of slowing down her torrid competition schedule.

“It’s definitely still a little tweaky, but it’s definitely way better than it was,” she said. “So it’s just slowly healing and getting back to where it is but I still have tons of competitions coming up so it’s not really stopping me from doing anything… I’m basically completely booked out until October. October is the first month that I don’t have anything competition or seminar-wise.”

In many ways, Clay epitomizes the current youth movement in jiu-jitsu. She has been training since she was in elementary school and competing alongside adults — and finding massive success — as a teenager. Indeed, she won the ADCC West Coast trials at age 16 (a tournament that Clay says motivated her to start studying leg locks), and continued to compete and win at a blistering pace throughout her colored belt years, winning multiple world championships along the way. Now just six months into her black belt career and only 21-years old, she has already conquered one of the sport’s biggest tournaments and submitted a number of its top competitors.

But as much as Clay represents youth, she brings a veteran mentality to competition. She recognizes that it isn’t just her athleticism or the tricks of competing that has led to her success, but rather simple, sustained and consistent training for years upon years.

“It’s just putting your head down, and grinding, and working your way to the top.”