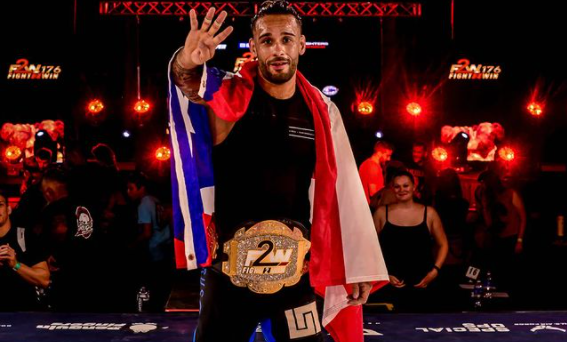 Junny Ocasio has one of the most technical and advanced leg lock games on the planet. The Murilo Santana black belt is also an outspoken voice in jiu-jitsu, unafraid to give his thoughts on the sport and the competitors in it. Which is why it comes as no surprise that, when Ocasio watched former opponent MIkey Musumeci win the Who’s Number One (WNO) title by way of a heel hook that he instantly dubbed the “Mikey lock,” Ocasio had to speak up.

“Jiu-jitsu-wise, the match was beautiful. [Musumeci] did what he went there to do,” Ocasio told Grappling Insider.

In June, Ocasio squared off with Musumeci at a WNO event, losing a hard-fought, 15-minute decision. That match saw the pair of grapplers engaged in extended battles for leg locks and leg entanglements, and given Ocasio’s proven technical acumen in that area, Musumeci’s more than proved his status as a world class leg locker.

Ocasio is quick to praise Musumeci’s ability, and was quick to praise his title-winning submission on Richard “Red” Alarcon at WNO. But Ocasio takes issue with Musumeci claiming that he invented a new technique — the “Mikey lock” — that will revolutionize leg locks. The Mikey lock, says Ocasio, is certainly nothing new, and it won’t revolutionize anything.

“Essentially, you’re doing rotation and using your head on the toe bone, and using something to pry the heel, and something to keep the knee line while you use your legs in different variations,” Ocasio said. “So it’s still gonna be the same no matter how you do it…

“It wasn’t so much that he hit a lock that we all hit. I’ve hit that lock. I’ve put that on my Instagram before. I’ve been using that lock for a long time… When I reacted to it, it was more like reacting to the way they’re promoting it, like ‘I’m gonna revolutionize jiu-jitsu with this brand new move that I invented and nobody has seen before.’ Well, that’s a lie. That’s not true. That move has been used by a bunch of us and I already put that out there and I didn’t claim it because so many of us have used those grips… That’s not gonna revolutionize leg entanglements.”

While Ocasio has been a frequent competitor on the no-gi submission-only scene and is therefore well-versed in reaping leg locks, Musumeci is relatively new to the ruleset. Although Musumeci won his first IBJJF world championship in no-gi (prior to the IBJJF’s inclusion of reaping and heel hooks at brown and black belt), he made a name for himself as a three-time gi world champion. In 2021, Musumeci switched his focus to no-gi, competing exclusively at WNO and The Road to ADCC.

“Maybe it’s new to [Musumeci] because he’s been doing no-gi specific with leg locks for like seven months, but I’ve been using that for years,” Ocasio said. “I have a reverse k-guard instructional I’m gonna put out in the next month and it revolves heavily around that move. So trying to claim that as the Mikey lock is insane to me. You can do it and you can try to claim it like that, but it’s just not true…

“He’s Mikey and he has a lot of stans. He’s like Eminem. He has a lot of people that just love him, and they should, he’s great at jiu-jitsu… I think if he would have said, ‘I like this and I’ve been working on it, and I think it works really well, and this is the way I do it,’ I think I would have totally been down for that. But to say you’re gonna revolutionize and show new things that you invented, that’s bullshit. Nobody wants to say that. Everyone wants to keep their mouth shut because they’re afraid because they don’t have the credentials or the place to say it. But I feel like I do have the place and I feel like it’s very important for me to say that because it’s not true.”

Disputes about the so-called Mikey lock aside, Ocasio looks forward to a rematch with Musumeci. And despite the decision loss to Musumeci in their first encounter, Ocasio gained confidence in defeat.

“It was exactly what I anticipated,” Ocasio said. “He’s a strong guy, jiu-jitsu IQ through the roof. But what I learned in that fight is that my IQ is through the roof as well. And I learned that I had skills to take it to him. I think there was a moment in the end of the match when I kinda just did Hail Mary and messed up, but that was like the last 30 seconds. The whole fight I thought was very even…

“I think he had two exchanges where he got kinda deep on an entanglement. I think I got one deep entanglement. But he wasn’t able to ever touch my heel… I’m just knowledgeable in jiu-jitsu. I feel like I have the skills to match him and I feel like I have the technique to match him. Walking away from that fight gave me a lot of confidence… I think just a couple modifications and that’s my fight to win.”

Outside of his most recent outing — a submission loss to Gabriel Sousa at 155-pounds — Musumeci has looked largely untouchable at his natural weight class. But after their 15-minute chess match in June, Ocasio believes that he might be the only bantamweight grappler with the jiu-jitsu skills to beat Musumeci.

“That’s definitely a fight that I’m looking forward to. I’m sure right now we’re on different paths but I have no doubt that we’re gonna lead back to each other. I don’t see anybody else in my weight class that can hang with his technical prowess enough to actually give him a threat, and I’m the guy.”

Ocasio’s confidence is rooted in his training under Murilo Santana at Unity Jiu-Jitsu. Known for producing many of the sport’s most technical grapplers, the gym has recently seen a surge of success, with Unity representatives Jeferson Guaresi, Diego “Pato” Oliveira, Mayssa Bastos, and Devhonte Johnson each taking home 2021 black belt world championships.

Ocasio credits the team’s success to its leader, Santana. Ocasio first met Santana when he was a blue belt and was the only person willing to train with Santana in early-morning one-on-one sessions. Under Santana’s close guidance (Ocasio jokes that he “got beat up every day”), Ocasio quickly climbed the competitive ranks and soon made the move to Unity to train full-time.

Outspoken as always, Ocasio believes that Santana is one of the best instructors on the planet, but is frustrated that he doesn’t get the recognition he is due.

Santana doesn’t get the recognition he deserves, says Ocasio, for a simple reason: he’s not motivated by external validation.

“[Santana] cares more about actual jiu-jitsu and the people– he’s one of the most caring people I’ve ever met — he would rather just help the person and not worry about trying to get clout from training them or their wins… He makes sure you stay humble and work hard, and we try to not make it about the titles. We try to be good people. That’s kind of our motto: hard work, good people.”

It’s the technique-oriented jiu-jitsu taught by Santana that Ocasio says will carry him to victory in a potential Musumeci rematch.

“You have to be versed in every position,” Ocasio said. “I’ve been training leg entanglements at the highest level for a long time. I still train in the room with the guys with the best berimbolos… I think that our styles match really well because we rely on being technicians. I’m not gonna muscle anything, I’m gonna out technique you. The more [Musumeci] starts shutting everyone down, the more it makes me look good.”

Make no mistake, Ocasio is gunning for a rematch with Musumeci. Does Musumeci claiming to have invented a new submission — one that Ocasio has been using for years — throw gasoline on the fire? Maybe. But ultimately, Ocasio wants the rematch for one reason: to challenge himself against the best in the world. And no matter what the path to that rematch is, Ocasio is ready to take it.

“I want to be the champion of everything. If I can get 10 belts I’ll try to get 10 belts… He won his division. He beat me. I have no excuses for that. It was an awesome match. I have nothing but respect for the guy. I think he’s top notch, and according to wins, the best in the world. And he just made a statement in his last fight and that’s amazing, and I would love to fight him again. I’m the only other person that can do it. If they want to run the match back right away or they want me to do a number one contenders match for Who’s Number One, or they want to do a mini-tournament for Who’s Number One, I’ll fight my way back. I’ll earn it back.”