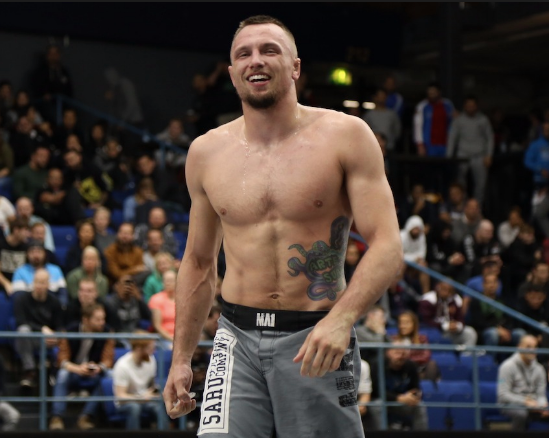 Unlike the lighter divisions, the 99 kg. bracket at the 2022 ADCC World Championships is stacked with ADCC veterans, including returning 99+ kg. champion Kaynan Duarte, as well as returning silver medalists Craig Jones and Vinicius “Trator” Ferreira.

Still, the up-and-comers of this division shouldn’t be counted out. Most notably, three-time gi world champion Nicholas Meregali is just three matches into his no-gi career, but has looked incredibly comfortable without the kimono and is coming off a win over fellow divisional competitor Rafael Lovato Jr.

Below are the favorites, contenders, and dark horses in the 99 kg. division. But first, let’s look at the entire division competitor list.

While it would be unwise to count out any athlete in this division, three names seem to stand above the rest as favorites. First, returning champion Kaynan Duarte has only improved over the past three years, picking up wins over a number of fellow 99 kg. competitors, including, most recently, a decision victory over Vinicius “Trator.”

If Duarte has a weakness, it is his leg lock defense. Returning 88 kg. silver medalist Craig Jones is widely considered one of the best leg lockers in the world, and will certainly test Duarte’s defense if the two meet. Jones has been working diligently at The B-Team to round out his game, showing marked improvements in his wrestling, making him one of the division’s most dangerous athletes.

Finally, “Trator” may not have the flashiest game, but he used it well in his 2019 run to a second place finish. Short and powerful, look for him to use his underrated wrestling and expert understanding of tactics to make it deep into the bracket.

With only three total matches in no-gi competition, Nicholas Meregali might be the most interesting competitor at the 2022 ADCC World Championships. He turned heads in his most recent performance, a dominant show of wrestling and guard passing against former ADCC silver medalist Rafael Lovato Jr. Under the careful guidance of New Wave’s John Danaher, Meregali will certainly be prepared for the ADCC rule set and tactics.

Patrick Gaudio saw plenty of mat time at the 2019 ADCC World Championships, going 2-2 while competing in three matches that went the distance. And while Gaudio may run into trouble with some of the division’s leg lock specialists, his experience under this ruleset shouldn’t be counted out; he is a real threat to make it to the podium.

It might feel odd to name a two-time champion a contender, but since capturing his last ADCC title in 2017, Yuri Simoes has competed infrequently and has suffered losses to several elite competitors. Still, he has shown over the years to have the wrestling and all-around skill to dominate competition, and if he gets hot this weekend, expect to see Simoes on the podium once again.

European Trials winner Luke Griffith seems destined for the ADCC podium, it’s just not clear if that will happen this year or in the future. The New Wave Jiu-Jitsu product is not only physically imposing for the division, but also a master technician. Watch for Griffith, who will likely be seeded relatively low, to spring at least one upset this weekend.

Rounding out the field of 99 kg. dark horses is Kyle Boehm and Devhonte Johnson. A longtime 10th Planet representative, Boehm won the West Coast Trials at heavyweight on the strength of his elite leg lock game; look for him to use his size advantage where available this weekend.

Johnson had strong showings at the East and West Coast Trials, and coming out of one of the most technique-oriented gyms in the world, Unity Jiu-Jitsu, we’re likely to see serious improvements out of Johnson, who can certainly make it deep into the bracket.