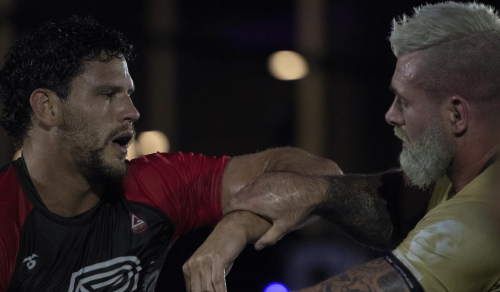 On Sunday, August 7, one of the biggest matches in submission grappling history took place, as Gordon Ryan and Felipe Pena squared off in a no-time limit match in the main event of Who’s Number One (WNO).

That match — which took place less than a day after the tragic killing of jiu-jitsu legend Leandro Lo — ended under odd circumstances, with Pena verbally submitting after about 45-minutes of action. Pena was not in a submission hold when he submitted, so the finish instantly raised eyebrows.

Now days later, FloGrappling, Felipe Pena, and Gordon Ryan have all shared their side of the story.

In an interview immediately following the match, Pena explained that he did not want to compete that day due to the loss of his close friend, Leandro Lo.

Video of Pena’s backstage interview has been removed from FloGrappling’s social media channels and website. Pena posted his statement on Instagram.

For his part, Ryan released a video detailing his side of the story.

I said if he wants to cancel the match and reschedule, fine…

He was trying to change the rules to be an hour long, or 30 minutes… If you can compete, then compete. If you can’t compete then we’ll reschedule it…

In short, Ryan says that Pena was pushing for a time limit (either 60 or 30 minutes), but Ryan refused. Ryan also states that Pena negotiated a higher payday to compete under the circumstances.

On Wednesday, more than two days after the event, FloGrappling released a statement about the match.

Ryan alleges that Pena “extorted” Flo for more money to compete, but according to Flo’s statement, it was Flo that offered Pena a pay increase.

Pena and Ryan are both slated to compete in the heavyweight division at the ADCC World Championships in September, and could square off there. Additionally, the pair has officially agreed to a fourth match at some point in the future.