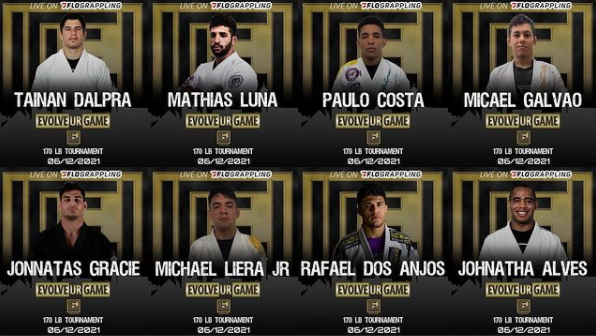 Just a couple months after the inaugural Evolve Ur Game (EUG) eight-man tournament took place on April 3, the promotion has set the line-up for its second eight-man, $10,000 tournament on June 12. The one-night tournament will feature eight of the best 170-pound gi grapplers in the world.

Micael Galvao: Still just a brown belt, Micael Galvao has been an incredibly accomplished brown belt competitor and is currently training out of Fight Sports Miami. He is also scheduled to compete at Who’s Number One on May 28, where he will face Andrew Tackett.

Tainan Dalpra: An Art of Jiu-Jitsu representative, Tainan Dalpra is just six months into his black belt career but is already a Houston and Dallas Open double gold medalist.

Jonatha Alves: Another Art of Jiu-Jitsu competitor and relatively new (but already accomplished) black belt, Jonatha Alves competed in the EUG 160-pound tournament, losing in the first round to Matheus Gabriel.

Jonnatas Gracie: Representing Atos, Jonnatas Gracie was a 2020 European Open and no-gi Pans champion. He is coming off back-to-back Fight to Win victories over Hugo Marques and Mattheus Luna.

Michael Liera Jr: Michael Liera Jr. is another Atos representative and veteran black belt competitor. He won his the European Open in 2016 and the Pans in 2018.

Rafael dos Anjos: Not be confused with the former UFC champion of the same name, Rafael dos Anjos is a brand new black belt under Rubens “Cobrinha” Charles.

Paulo Costa: An experienced IBJJF competitor, Paulo Costa will return to gi competition after competing at the no-gi Pans in 2020 and 2021.

HOW TO WATCH: The EUG 170-pound tournament will take place on Saturday, June 12 and will live on FloGrappling (subscription required).