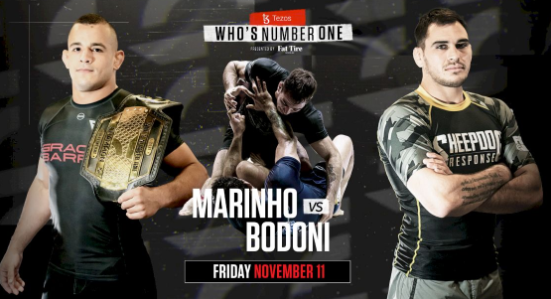 FloGrappling has announced the full main card for the next Who’s Number One (WNO) event, headlined by a light heavyweight title match between current champion Pedro Marinho and challenger Giancarlo Bodoni.

WNO will return on Friday, November 11 with a six-match main card featuring a number of the best no-gi grapplers on the planet.

In the main event, current WNO light heavyweight champion Pedro Marinho will defend his belt for the first time when he takes on recently-crowned ADCC champion Giancarlo Bodoni. An IBJJF no-gi world champion, Marinho captured the vacant title earlier this year in a decision win over Craig Jones. He followed that up with an unsuccessful bid for the heavyweight title against Gordon Ryan.

Standing across from him will be one of 2022’s breakout stars in Bodoni. The New Wave representative after winning a stacked ADCC East Coast Trials late last year, he impressed at the ADCC World Championships, submitting returning champ Matheus Diniz on his way to the gold medal.

The co-main event will showcase two of the most exciting talents at lightweight, as Art of Jiu-Jitsu’s teenage prodigy Cole Abate will be put to the test against the experienced and scrappy Josh Cisneros.

Widely considered one of the best young grapplers in recent memory, Abate burst onto the scene last year with a massive win over longtime veteran Geo Martinez, only to win the ADCC East Coast Trials just weeks later. His opponent, Cisneros, is an Ares BJJ representative and one of the most aggressive, high-paced competitors on the scene. Cisneros had a strong performance at the ADCC World Championships, submitting Ethan Crelinsten and defeating Sam McNally to take home fourth place.

How to watch: WNO: Pedro Marinho vs. Giancarlo Bodoni takes place on Friday, November 11 and will air live on FloGrappling (subscription required).