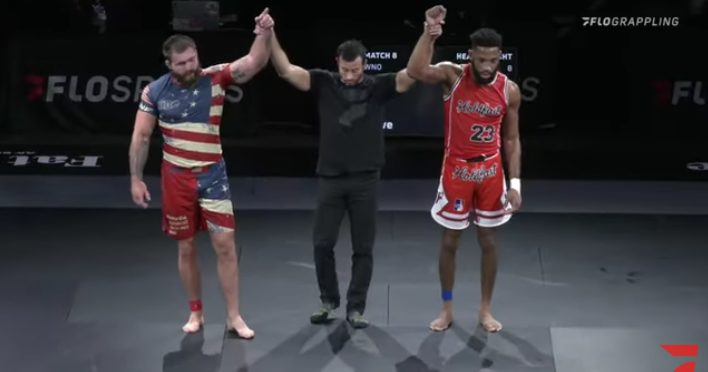 On October 21, top no-gi grappler Gordon Ryan made his much-anticipated return to competition to face current UFC welterweight Philip Rowe in a 15-minute “exhibition” match. That match was held under a special ruleset in which a submission would not signal the end of the match, but rather just a re-start on the feet.

In his first appearance since taking an indefinite leave of absence from competition due to ongoing health concerns earlier this year, Ryan did exactly as many expected, easily controlling and submitting the smaller, lower-ranked Rowe. Ryan first submitted Rowe in under a minute with a heel hook, likely just to show he could do that whenever he wanted. Over the next 14 minutes, Ryan would submit Rowe three more times, and often allowed Rowe to gain dominant position just to show his escapes.

FloGrappling has now released for free the entire match between Ryan and Rowe. Watch it below.

Gordon Ryan was a 2019 ADCC double gold medalist and is considered by many to be the best pound-for-pound no-gi competitor in the world. Prior to the match against Rowe, Ryan had twice competed in 2021 in dominant submission wins over Roberto Jimenez and Vagner Rocha. In May, Ryan announced his leave of absence from competition due to chronic stomach issues.

Philip Rowe is a current UFC welterweight with a professional MMA record of 8-3. In submission grappling, Rowe has competed for both Submission Underground and Who’s Number One, with losses to Gabriel Checco and Kody Steele.