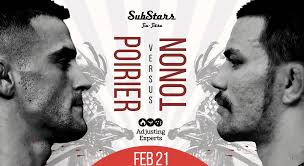 Garry Tonon has unfortunately been forced to withdraw from his upcoming grappling match against Dustin Poirier due to an eye injury. The match was scheduled to happen less than a week from now at Substars and was due to raise a substantial amount of money for charity (The We Defy Foundation) as Tonon had planned on donating his ticket and PPV sales money. The charity will still end up with some money however as Tonon’s teammate, Gordon Ryan, was also donating his ticket sales to the cause.

This would’ve been a fantastic headlining match between one of the best No Gi grapplers to ever transition to MMA and Poirier, a fantastic grappler and BJJ black belt in his own right. The two men have had stark differences in their recent careers however as Poirier was most recently seen on the receiving end of a 4th round submission loss to the current UFC Lightweight Champion, Khabib Nurmagomedov. Tonon on the other hand is still unbeaten in MMA with a 5-0 record and all five of those fights ending in finishes. It’s this stellar start to his career that’s led to Tonon pushing hard for a title shot in ONE FC against current Featherweight Champion, Martin Nguyen.

This kind of opportunity doesn’t come around often and understandably, he can’t risk aggravating an existing injury and having his career suffer as a result. Garry Tonon mentioned in a Twitter post that he has an MMA fight scheduled for April and that the risk of re-opening the cut above his eye is too great, because that injury would then postpone his fight camp for April. We can only hope that a replacement is found on short notice and Poirier is still able to compete in the main event, and we wish Tonon a speedy recovery so he can get prepared for his next fight!