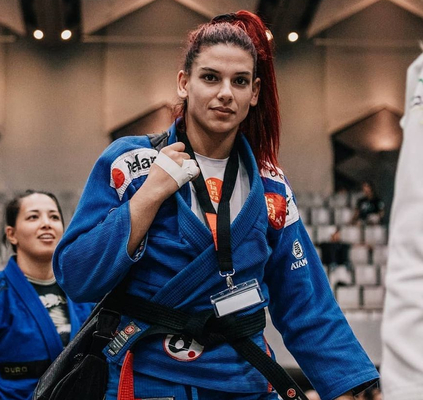 Claudia Do Val is one of the world’s most renowned professional female grapplers and Brazilian Jiu-Jitsu (BJJ) black belt competitors, she currently holds the IBJJF world title for Gi and No-Gi, and is a x3 black belt world champion. Alongside all of her world titles, Do Val is also known as one of the nicest people in the sport, so nice, she agreed to let Grappling Insider interview her – so thank you very much for agreeing to speak with us Claudia! Let’s talk – getting to know Claudia Do Val!

Getting to Know Claudia Do Val

With all of the; skill, technique, and talent Do Val has when it comes to BJJ and competing, you might think that (like many other BJJ world champions) she has been training all her life, but she actually only started training BJJ when she was 21 years old. Do Val picked up Judo at the age of 18, but once introduced to Brazilian Jiu Jitsu, her focus shifted solely to just that. Prior to becoming a professional athlete Do Val was studying, she says: “I was studying engineering for a little bit. Didn’t finish. I never planned to be a professional athlete. It just kind of happened.”

Since becoming a professional athlete, the amount Do Val used to train before competing Vs when she started competing has actually decreased, “I used to train for the love of jiu jitsu every day, twice a day. But when I started competing, I got an injury, and then started training maybe 7 times a week. (some days one, some twice).” Do Val didn’t compete much at white and blue belt but that changed at brown belt, when she returned to the tournament scene (2015), and made her mark as a fierce competitor to watch out for; after winning the European Championship, and the World Championship in 2016.

Making her black belt debut in 2017 she won the European Championship, the Brazilian National Championship and the World Championship all in the same year. Do Val is a serial competitor with an extensive list of first places on so many high-level tournaments, so I wondered what does she think was the best fight she’s ever had? The black belt world champ says, “I think it was Brazilian Nationals 2017.” Watch Do Val’s performance below:

Do Val usually plays a dominant game in guard so it comes as no surprise that her favourite position is guard with two grips, she states her preference, “Playing guard with both grips on sleeve, or collar and sleeve.” Do Val continues to state her most favoured submission, “Omoplata because I can see it everywhere and catch it a lot.”

For some people BJJ is a hobby, but for others it is their life. Like many of us know, due to Covid-19 a lot of athletes have been on hold, and unfortunately due to the crisis Claudia hasn’t been able to train much – let alone compete, “Because of covid I haven’t trained much.” I wondered if Do Val has any hobbies outside of BJJ? If so, what are they? She responds, “I do. I like to watch movies/ series. Recently, I also acquired a taste for cosplaying.”

Being well known on the BJJ scene, Claudia has built up a huge active social media presence and a (circa) 175k following on Instagram where you can keep up with her day to day life, training, tournaments, and hobbies; as well as watch BJJ tips from the pro herself. Follow Claudia Do Val on Instagram.