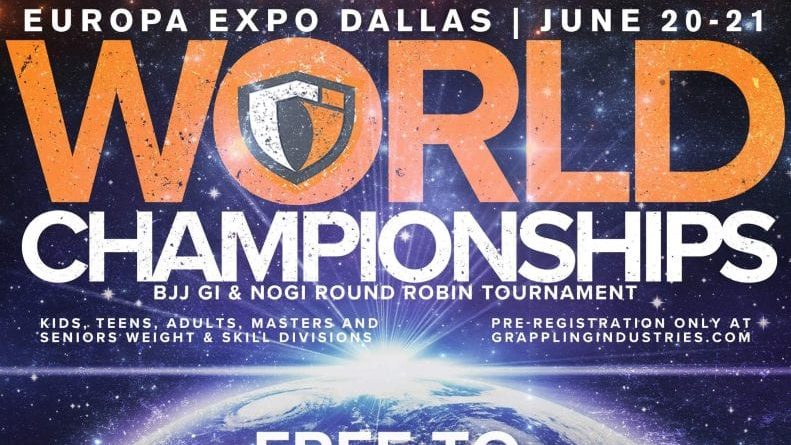 Grappling Industries is one of the fastest growing BJJ tournaments on the planet right now. From relatively meager beginnings, the promotion has expanded from the United States over to Canada relatively quickly. Not long after this, they expanded into Europe and started putting on events everywhere from London to Munich and Paris to Dublin. Last year they even managed to stretch their reach all the way to the land down under by putting on several events across Australia.

Now, for the first time ever, Grappling Industries will be putting on a World Championship event at the Europa Expo in Dallas, Texas. The event will take place across two days, June 20th to 21st and will no doubt attract huge numbers of applicants eager to take advantage of the first opportunity to be crowned a Grappling Industries world champion.

The unique format of Grappling Industries tournaments has quickly become a favorite with competitors as they offer a round-robin format where an entrant will compete against every one of his opponents in a five-man league. This essentially guarantees four matches for every competitor, potentially eight if you’re entering both their Gi and No Gi brackets. This format gives competitors the biggest bang for their buck when compared to traditional tournament formats which will only ever guarantee one match or at the very most, two if using a repechage system.

They are easily the hardest working promotion around, putting on a total of fifteen events in January 2020 across four different countries and three different continents. This isn’t the only reason they’re quickly gaining in popularity though, Grappling Industries are becoming known for smoothly run events and very little in the way of technical issues.

Keen to capitalize on this well-deserved reputation for being competitor-friendly, Grappling Industries has also revealed that their first ever World Championships will be free to enter for all competitors. This is completely unprecedented in the world of competitive grappling and will be a welcome to change to registration fees that can be enough to bankrupt athletes.