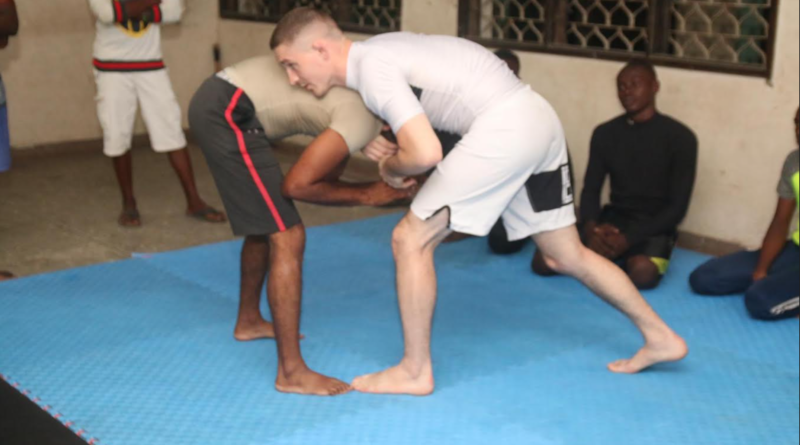 Jack Brown is a BJJ brown belt No-Gi competitor from Scotland, who’s travels have taken him to coach as a volunteer at one of the BJJ academies over in Kenya – Sharks BJJ. Whilst looking for clubs to train at over there, Jack came into contact with the organisation ‘Lionheart Initiative’/ ‘BJJ4Africa’, who sent him over to Sharks BJJ in Mombasa. Jack is coaching the team over there as a volunteer and is trying to raise money for the team so they have enough facilities and equipment – so that everyone who wants to train BJJ – is able to train BJJ. The coach who runs the club is a blue belt called Imran Chaudhry. This is the GoFundMe link.

Classes can be between 20-40 students which is a standard jiu jitsu class really, however the mats only allow four sets of people to roll at any given time. The classes are also free and are held in one of the back rooms of a mosque so there isn’t really many funds to be able to invest in more resources meaning the fighters have to rely solely on volunteers. Jack says, “They also do kids classes. I’m pretty sure it’s every day (they train), and it’s always free.”

How Did it All Happen?

Recently I’ve been seeing more and more about BJJ practitioners going and volunteering over at BJJ school’s in Africa, so I wondered why Jack decided to do it too, he states,

“So I was detective in the police in Glasgow for the past five years and then in June I met my now fiance. We’ve known each other for about ten years but we only kind of got together in June. She’s been living out in Vietnem and Thailand for the past five years. I decided I wanted to go travelling with her, so I took a career break.”

He continues, “The plan was to go to Vietnam and Thailand but it’s still shut because of Covid. So we’ve been pretty much killing time, just now we went to Crete in Greece. I did some coaching there and then I got a job in Serbia, Belgrade. I coached there for a couple of months at Kimura BJJ and decided Kenya was next.” Jack adds, “When we were in Serbia we were just killing time until we could get to Asia so we went on Skyscanner, had a look at the list and Kenya is weirdly cheap. It’s like £200 for the flight each, and it’s January, and it’s one of the few places that will still be warm in January.”

How Long Will Jack be Spending in Mombasa with The Sharks?

Jack has currently spent just over two and a half weeks in Kenya and has plans to coach Sharks BJJ right up until February 7th (that’s when he has accommodation up until) depending on the funds of the GoFundMe. I didn’t know how long Jack was planning on staying out there for so after a confusing talk about visas (is three months the maximum?) he says it would be very much dependant on the GoFundMe,

“In terms of the GoFundMe, my main focus is to get these guys mats. First £850 I really need is going straight into mats, if there’s any left, it could maybe cover some very basic living expenses for me then we can maybe look at staying on and I can keep providing free classes. We’ll see what happens.” As for the visa question, Jack says, “I’m not too sure. All I know is we get kicked out after three months. We have no plans for where we’re going next, we’re completely flexible.”

When asking him how he went about it all he said, “I just did what I usually do when you go to a new country, I just started googling academies and stuff. There really wasn’t much at all. I ended up reaching out to Lionheart to say I was going to be here. As far as I know, I think I’m the highest rank in the country. So they teamed up and sent me over to The Sharks in Mombasa.” As well as helping to link Brown up with Sharks BJJ, Lionheart Initiative have also said if he manages to raise £1000 on his GoFundMe page, they will also donate £500.

Jack set the GoFundMe target to £2000, I asked what he plans on getting with the donations and the main goal was mats, as they currently only have around 10 mats for the whole class. When discussing with the coach of Sharks BJJ, to get a decent amount of mats to fill the space would cost around £850. Brown says, “And that’s buying them from a place in Africa. I think we did have a go at pricing it up from China, and from the UK, but it’s crazy when you do it that way.”

Also he spoke about a small amount of the donations contributing to cover his basic living costs if he was to stay out there a little bit longer and continue volunteering at the club. Jack set up the GoFundMe page the same day we did the interview (three days ago) and he has already raised a whopping £1500 of his £2000 target. It looks like you will be spending a little bit longer with The Sharks Jack!

Differences Between Training/Coaching in Africa Compared to UK

Jack Brown has trained and coached BJJ in loads of different places all over the world so I wanted to know what differences there were between training/coaching in Africa Vs the U.K. (despite the obvious heat impact). Jack states, “It’s very basic here. I’d say the guys here are more interested in the self defence aspect of jiu jitsu, they’re not interested in putting stuff on social media or sponsorships or anything like that, they’re doing the sport purely for the love of it or genuinely because they want to learn some self defence coming from a rough area. The class on Monday was easily the most attentive class I’ve ever taught and they soaked up every detail I was showing them. Super passionate about BJJ.”

The only negative thing Jack had to say was about how f*cking burnt he was. Well considering you’re training in 32 degree heat – I’m not surprised!

To donate to Jack Brown’s GoFundMe and contribute towards Sharks BJJ Club in Mombasa to help their fighters keep doing what they love – click on the link to donate.