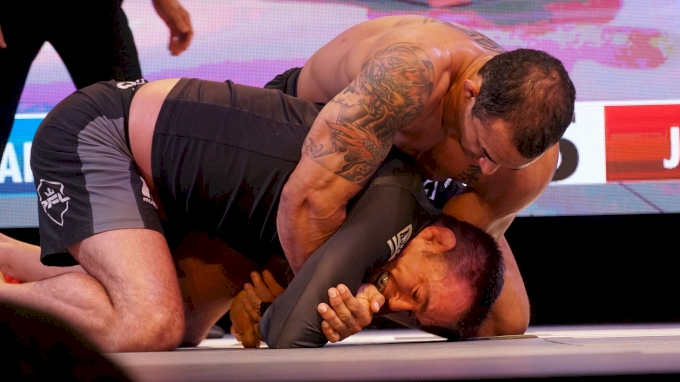 Everyone is looking forward to the main event of F2W 150, Friday night Aug. 21 between world champion Romulo Barral and the first American black belt from Ruben Charles, Tanner Rice.

I met with Jake Shields for some insight on Barral. He competed against him last year in 3rd Coast Grappling. Barral won by decision, although it was not a clear victory.

If you don’t remember, in the sudden death overtime, Barral chose to start in Shields’ guard. Barral almost took Shields’ back, but did not get his hooks in. Shields then swept Barral, but the referee treated it as an escape instead of awarding points. Time eventually ran out and the judges gave Barral the win.

I asked Shields his thoughts on their match and for his prediction for Friday night.  Here’s what he had to say.

G.I. Tell me your thoughts on your match against Barral.

Shields: It was a really close, really tough match. He’s a strong athletic, aggressive guy. Super big and strong, so he was a tough opponent. Overall, he’s one of the best.

G.I. I re-watched that match and forgot how close it was. You guys had some crazy scrambles. I thought it was weird how they scored it. They gave him points where I don’t think they should have.

Shields: Yeah, I’ve honestly not competed in IBJJF rules enough, but I thought I had scored and won. But I don’t 100-percent understand those points so I’m not positive on that. (Laughs)

G.I. Barral was huge. Do you think his size played a factor?

Shields: I think a little bit. I think he is definitely bigger than me. I don’t know what he weighs, but I’m guessing he’s over 200lbs and he’s really strong and aggressive. It definitely helped.

Shields: I’m gonna go with Barral. He’s a little more experienced and I believe a little bigger.  haven’t watched Rice compete that much. I know he’s a really talented guy, but overall I’ll have to favor Barral.

The match takes place in Dallas.  In the co-main event, Marcio Andre takes on Ronaldo Junior.  The event will be streamed live on FloGrappling.