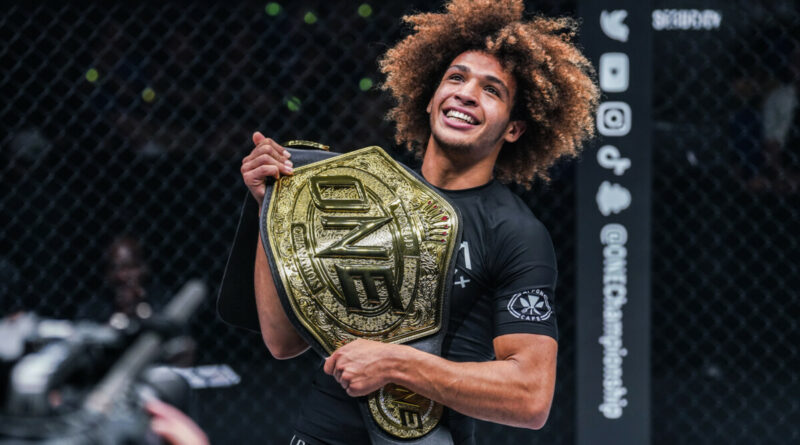 2022 ADCC champion Kade Ruotolo faced 4x world Sambo champion Uali Kurzhev for the inaugural ONE Lightweight Submission Grappling world title. Both men wasted no time after the opening bell sounded inside the Axiata Arena in Kuala Lumpur, Malaysia. Ruotolo’s bout with Kurzhev was the first of three title fights on the ONE on Prime Video 3 main card, which included a bantamweight title bout between John Lineker and Fabricio de Andrade in the main event.

Kade Ruotolo defeated Shinya Aoki on his maiden outing inside the ONE circle. After announcing his win with a victory over a legend like Aoki, Ruotolo has now proved his skill against another world champion in Uali Kurzhev. After failing to submit the Japanese icon (Aoki), the BJJ phenom vowed to finish Kurzhev and he certainly lived up to that promise.

The Inaugural ONE World Champion

After Ruotolo’s impressive four-submission win streak at ADCC, winning gold and becoming the youngest ADCC champ, the streak goes on, and he submits four-time Sambo World Champion Uali Kurzhev via heel hook in just over four minutes in the first-ever ONE Lightweight Submission Grappling World Title match. By doing so, Ruotolo has made history by becoming the inaugural ONE World Champion.

The 19-year-old BJJ prodigy won the ONE Championship lightweight submission grappling belt along with a $50,000 bonus for his victory.

Though Kurzhev reportedly failed a hydration test prior to weigh-ins, making him ineligible for the belt, the Russian still appeared game to put his best foot forward in the catchweight bout that ensued. Kurzhev had missed weight for the fight and was unable to claim the title even with a win, but that ended up being no concern after the Russian was submitted. Ruotolo became ONE Championship’s second submission grappling champion after Mikey Musumeci claimed the bantamweight title at ONE on Prime Video 2.

The High’s Were Short-Lived for Kurzhev

Kurzhev started off strong, and caught Kade with a foot trip early on, however Kade quickly recovered, and quickly figured out the Russian’s takedown strategy. When Kurzhev went for a throw attempt, Ruotolo took advantage of this and spun around on to Kurzhev’s back, where the young champ spent the next few minutes attacking the Russian’s neck.

Four minutes in, Kade clamped down on a heel hook entry which eventually forced Kurzhev to tap at the halfway mark of the ten-minute superfight.

Kade plans to put his $50,000 bonus towards the jiu-jitsu gym that he and his brother Tye are currently building in Costa Rica. What’s next for the freshly-crowned ONE grappling champ? According to Kade, he hopes to share a fight card with his brother Tye in December – and if Tye wins a second ONE grappling superfight, Kade’s potentially down for an eventual matchup of Ruotolo versus Ruotolo in the ONE Circle.

“He’s got two wins over me [in previous competition],” Kade said of his twin, grinning. “So I’d love to get one back.” And if that win arrives in a defense of Kade’s new belt, all the better.

Ruotolo also showed great sportsmanship and admiration for Kurzhev. “He caught me clean with that foot sweep at the beginning – I have got to give him props for that,” Kade told reporters.

Want to catch up on all the action from ONE on Prime Video 3? Catch up on Ruotolo vs Kurzhev – along with two other world title bouts – streaming from Amazon Prime.