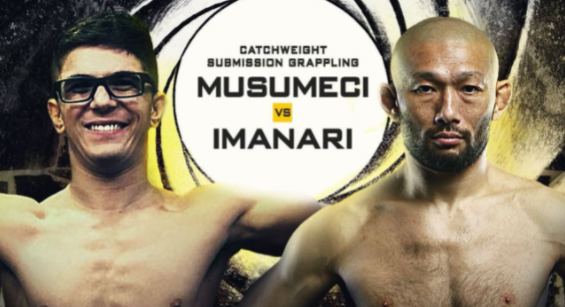 The current Who’s Number One (WNO) bantamweight champion, is one of the best pound-for-pound grapplers on the planet in both gi and no-gi competition. After winning three black belt gi world titles from 2017-2019, Musumeci turned his attention to no-gi in 2021, defeating top competitors like Junny Ocasio and Geo Martinez. Musumeci’s successes in no-gi competition have earned him an invite to the 2022 ADCC World Championships.

Masakazu Imanari is a veteran of over 60 professional MMA bouts dating back to 2000. He is a grappling specialist; of his 39 wins, 28 are by way of submission. Currently 46 years old, Imanari last fought in October 2021, winning by first-round armbar.

In the grappling community, Imanari is of course known as the man that invented and/or popularized the “Imanari roll,” a technique that takes a fighter from standing directly into an inside heel hook leg entanglement. Watch Imanari himself demonstrate the move here.

ONE Championship submission grappling bouts consist of a single 12-minute round of submission-only grappling. In the event no submission occurs, the match is declared a draw.