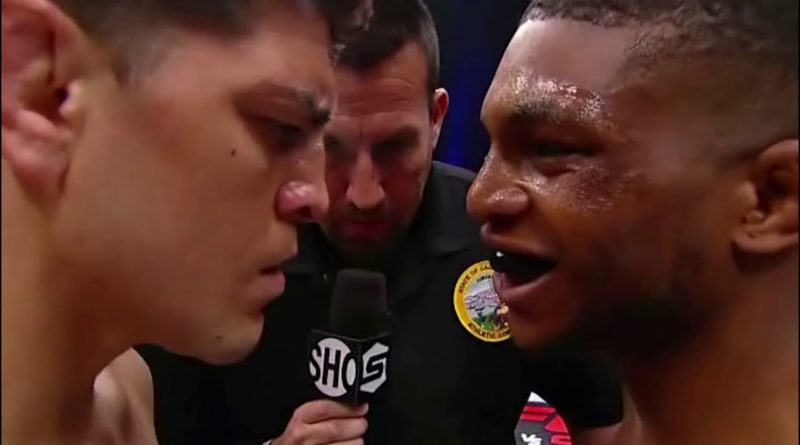 From the outside the appeal of combat sports is alluring. Many wish they could fight under the bright lights, make millions and be a star, but the reality of being a professional mixed martial artist is far from idyllic. In a sport full of extroverts, Nick Diaz stood alone as a maverick; the antithesis of what makes a star, but against all odds, his authenticity made him one of the sport’s biggest stars.

They say that a fighter is born through hardship and strife, but the truth is that the modern mixed martial artist is the culmination of athleticism, determination and opportunity. Gone are the days of the tough man, no longer is the world of MMA dominated by delinquents, in fact you’re probably more likely to see a college graduate in the UFC’s Octagon than you are a thug. While the old days are gone, for fans there is a special place for real fighters and that is where the Diaz brothers come in.

In 2nd grade, Nick Diaz was the class clown, a constant cause of trouble. Nick once pulled the fire alarm and got lambasted by his teacher. As part of UFC Primetime, the UFC interviewed that same teacher and she said the Nick Diaz she taught as a child was the exact same man she saw in the ring, his mannerisms and speech hadn’t changed.

The truth is that Nick Diaz’s life could have been much different, but the struggles of growing up poor in Stockton took their toll on the elder Diaz brother. The making of Nick Diaz’s indomitable will is the culmination of a series of heartbreaking events.

Diaz’s time in high school was horrific by any standards. On a daily basis he was caught up in street fights and was jumped on multiple occasions. While his violent upbringing had a huge impact on Nick Diaz, it is likely the heart break and anguish of the death of his first love that left him irreparably changed.

Diaz had found solace in martial arts training with Steve Heath, he had managed to stay out of gangs, which were actively trying to recruit him at the time. He found Brazilian Jiu Jitsu and he was happy, but all that was about to change. Prior to Diaz’s first pro fight, his girlfriend committed suicide.

In his on words, Diaz chronicled the hardest chapter in his life to MMAFighting.com:

“Before anybody in my class made it out of high school, I was in a continuation, which I also got kicked out of because my friend Bart was also in the class and got into a big fight, which the teacher had to break up and did not want either of us in the school anymore, so I tried homeschool but that was never going to work. I was so far behind, it was never going to happen and by then I was training to be a pro fighter. My girlfriend knew it but had started dating Bart to make me jealous. He had a gun and neither of us wanted to piss him off because he would walk around with it.

Before I ever had my first pro fight, July 5, 2000, Bart had a party at his house. The night before, Stephanie had told me she loved me. After the party, I was gonna go back to her house with her brother — he was my best friend — but some friends weren’t doing well and headed to my house. So I had to go.

An hour later I got a call from her mom saying, ‘Are you with Stephanie?’ She came straight to my house to get me, took me up and down the Frontage Road on Highway 99 by my Grandma’s house next to their trailer park.

There was a wreck on the freeway. I jumped the fence and saw only one car and ambulances.

She had walked and killed herself on the freeway. The girl I loved more than anything had tried to kill herself for the third time and succeeded.

She was gonna go to college. She was an avid student and and was doing everything I couldn’t while living in a trailer park where everyone was doing dope. Meanwhile, I focused my whole high school years worried about what her and her friends would think if I lost a fight to her ex-boyfriend and football friends. I could never make attendance, hung out with the wrong people to hold my ground as a fighter and someone who I would fight for was important to me.

There was no way I was gonna go to school. I had no money, no car. I would have driven there and stopped her. After that, I was grown up. It was all over. I wasn’t a kid anymore. I won my first fight in the first round with a choke and all I could think about was her, just like when I was in school.

I would run seven miles and back to her grave just to promise her I would make it as a fighter like she knew and had told me she knew and was proud of me.”

With Diaz’s heart broken and his options limited, he set his sights fully on MMA dominance and he spent the next decade of his life fighting to make Stephanie proud.

Diaz’s raw emotion and vulnerability endeared him to fight fans and his time career has been a roller coaster magic moments and bitter disappointments. The thrill of defeating Robbie Lawler, of dominating in Strikeforce and of beating BJ Penn are laced with the disappointing defeats to Georges St-Pierre and Carlos Condit, but even in defeat Diaz was always true to his never-say-die style.

Realistically Diaz’s best fighting days are done, but the prospect of him fighting lingers in the periphery. We have been blessed with a great career, but as fans we always want to see more. Diaz has left the cage and found comfort in the night club. Being paid to make club appearances is easy money after fighting professionally for almost 20 years.

Should Nick Diaz fight again? Only he knows the answer. History dictates that once a fighter loses the need to fight that his career is on a slippery slope. It seems fighting helped Diaz exorcise some of the demons that surrounded his psyche and perhaps he is better off out of the bright lights.