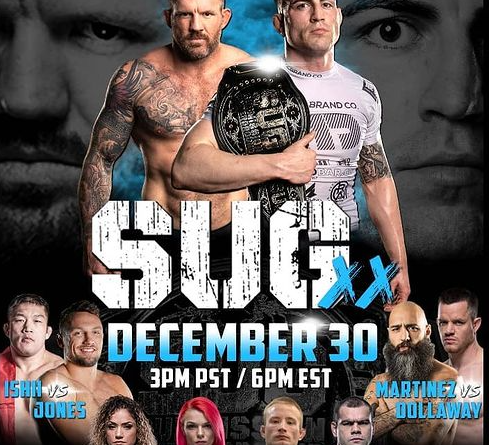 Submission Underground returned for one last event before the new year. SUG20 took place on 30th December 2020, in Portland, Oregon U.S. at 3PM PST/ 6PM EST on UFC Fight Pass. Presented by Chael Sonnens, SUG20 is a sub-only No-Gi event with 20 of the world’s greatest and most dangerous submission artists for 10 thrilling fights. Amongst those thrilling fights will also be a headline fight between reigning SUG open weight champ Mason Fowler Vs Bellator Heavyweight world champ Ryan DuWayne Bader. The last event of 2020 was announced on very late notice and was revealed to fans less than two weeks before taking place.

Length of Round : 5 minutes.
Sub Only – All Submissions Legal.
Overtime Rounds: 3
Flip a coin to decide who starts either from back control or arm control when it goes to OT.
2 minutes OT round.
“There WILL be a winner and there WILL be a loser” – as Chael Sonnens says.

Starting off the night in the prelims was John Simon Vs Charlie Gilpin and they have quite the grapple, but neither succeed in getting a submission in the first round which takes them to over time. The coin flip means Gilpin is on Simon’s back, but Simon escapes meaning that if he gets a submission when they swap positions and start the clock again – he will have won. Simon also decides to start on the back, and catches a body triangle shortly followed by securing a rear naked choke (RNC) and getting the tap within 25 seconds. There appeared to be little to no urgency from Charlie in this moment – was he convinced he wasn’t in trouble or was it just too late?

The second fight of the night was Juan Bernardo Vs Alex Larmey, who both ended up playing footsies and trying to submit from the waist down, which took them to overtime. The flip of the coin means Larmey goes first and he chooses back control, and goes straight for a head and arm set up getting the tap in 22 seconds. In order for Juan to win, he needs to submit faster, but if Larmey escapes – he’s won. Larmey has 22 seconds to survive or escape and he does both.

Third fight of the night was a female match between BJJ black belts Kristin Mikkelson Vs Rita Gribben. This was such a 50/50 fight, as were the overtimes. A real even match. Neither successfully scored a submission on one another which meant the winner came down to quickest escape time in OT which was Mikkelson.

The next fight, Benji Silva Vs Micah Brakefield ended up with Silva injuring his arm during OT from walking out too far (hitchhiker) when an arm bar was on, bending his arm and shoulder the complete wrong way. The sub was on straight away, Silva failed to tap, and Brakefield got the win within eight seconds into the second round of OT.

Coming from 10th Planet in Texas, Andrew Verela fights Ben Egli from Oregon. Varella aims for a takedown and goes for the back, sequencing into full mount. Varella does a lot of position switching until he’s half-on-half-off the back and secures a sneaky choke including the arm that Egli left behind submitting him in the first round without the need for OT.

On to the Main Card and what a match up Hunter Colvin Vs Gabriel Gonzaga is! Gonzaga weighs around 290lbs against Colvin’s 210lbs, and I think fights like these prove there’s a tipping point when it comes to the question “does size matter?” The two exchanged tight heel hooks at first, then the match went to overtime.

Gonzaga started with the arm – meaning 290lbs on one arm. Gonzaga goes for an arm bar, Hunter defends well with good framing, however Gonzaga does a good job of maintaining his position and catches the arm bar sub in one minute and seven seconds. Hunter decided to start on the back and tries to body triangle his opponent, but due to the sheer size difference Gonzaga managed to break free – as that’s a big body to try and triangle meaning Gonzaga took the win. Hopefully any beef they supposedly had has also now been squashed.

Next up is UFC fighter Gillian Robertson Vs 10th Planet and ex UFC fighter Pearl Gonzalez. Gillian appears to be dominating the match but Pearls defence game is incredibly strong and she uses the cage fence to her advantage, but it just wasn’t enough as Gillian snatches the submission in the first round via RNC. The last fight on the Main Card was between mixed martial artist CB Dollaway Vs 10th Planet BJJ black belt Richie ‘The Boogeyman’ Martinez. This fight seemed to be over in the blink of an eye as Martinez caught an arm bar within the first round in 55 seconds.

The night continues with fast submissions within the co-main and main event. The co-main event came as no surprise with Craig Jones taking the win against Satoshi Ishii. Even though Ishii is a Judo gold medalist, there is still a big difference between a Judo gold medalist and one of the world’s top grapplers – it was a given that Jones would come out on top. Jones threatened RNC as a set up, although it looked super tight, Ishii escaped. Jones then transitioned from an arm bar, to which Ishii defends, to then get the back, body triangle, and secure the rear naked choke again. This time finishing it – ending the round in two minutes and eight seconds.

The Main Event was the Absolute Submission Championship between Bellator fighter Ryan DuWayne Bader and Caio Terra’s BJJ submission champ Mason Fowler. Fowler recently beat Craig Jones… twice, as he agreed to fight again due to controversy that surrounded his initial wins against Jones. Proving to continue to be one of the greatest submission champions around at the minute, Fowler takes home yet again another win, this time from seasoned MMA veteren Ryan DuWayne Bader. Fowler secured a nasty arm bar with a double lock on Bader and got the tap in one minute and 39 seconds – and remains the Absolute Champion of the World.

SUG have confirmed they will be back in March so here’s to many more great sub-only fights after the New Year!