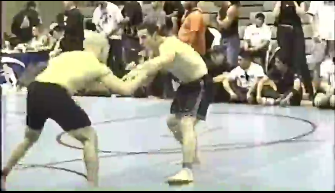 Years before they were elite MMA fighters competing in the best promotions in the world, longtime MMA veterans Tim Kennedy and Diego Sanchez competed in a grappling match. Kennedy recently released on his Instagram page video of that match, which took place in the absolute division of a tournament in November 2002. Watch that match below.

What we see above is two young grapplers with tons of potential. Kennedy appears to be a better wrestler, but both men seem comfortable on the feet, on their backs, or on top position. Ultimately, it would be Kennedy’s guard passing that wins him the match, but Sanchez showed an ultra-aggressive approach that he would soon become known for in his MMA career.

Diego Sanchez burst onto the MMA scene in 2005 when he won the first season of The Ultimate Fighter. Across his 15-year UFC career, he would be involved in countless memorable fights, including several Fight of the Year candidates, one of which earned him a spot in the UFC Hall of Fame. Sanchez unsuccessfully challenged for the UFC lightweight title in 2009, losing by doctor stoppage to BJ Penn. He last competed in September 2020 in what would be his final UFC bout.