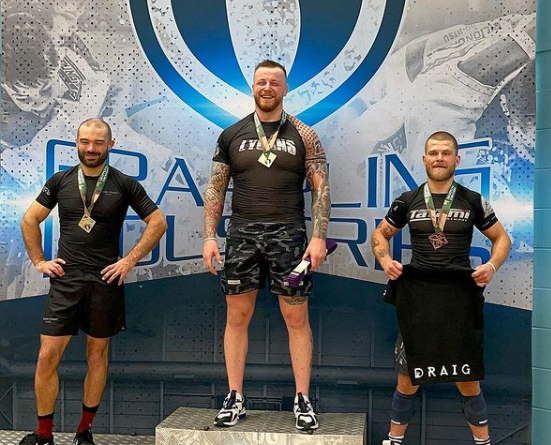 Grappling Insider speaks with ex world champion powerlifter Mark MacQueen about his tremendous win in the absolute division at Grappling Industries in Manchester last week. Alongside him in the absolute was a purple belt, a high level brown belt and two black belts; one of which was British champ and Polaris veteran, Ross Nicholls.

Mark MacQueen is 26 years old from Glasgow, Scotland and trains under second degree black belt and multiple time IBJJF champion, Marcos Nardini. MacQueen began training Brazilian Jiu Jitsu in April 2019, and after winning the IBJJF White Belt Euros in January, he did a competition two weeks after that and was awarded his blue belt there.

Having had his powerlifting background (former IPF World Champion Powerlifter), it held him in somewhat good stead for starting jiu jitsu as he has that initial weight and power advantage over the majority of his teammates. For those who may not know, ‘powerlifting’ is where you see who can squat, bench and deadlift the most weight combined. MacQueens best total in powerlifting was 920kg which is also the biggest total ever in Scottish powerlifting. Mark has a list of credentials when it comes to powerlifting such as winning the Scottish Championships (six times), the British Championships (four times), Europeans, Commonwealth and the World Championships. As you can imagine… Mark is a big guy.

When powerlifting Mark was weighing in at around 150kg (circa 330lbs), and says he felt it was a full-time job just trying to eat 8000 calories a day. However, his brother was a blue belt in BJJ and he decided to give it a try, as he fancied a bit of a change in lifestyle.

Mark speaks of his transfer from powerlifting into Brazilian jiu-jitsu, “At the end of 2018, I felt disillusioned with powerlifting full time. I was sick of being so big and heavy; eating 8000 calories a day – it was like a full time job just eating.” He continues, “I felt disillusioned with it. I just needed a change. I didn’t want to be so big and heavy and wanted to change my lifestyle a bit.” MacQueen currently weighs 118kg (260lbs).

How Did Mark Feel the Comp Went?

This was Mark’s first competition at blue belt and the absolute was the first division (any weight class and any belt – blue and above) and he got some incredible wins. He says, “It was amazing. Really well run. I did the absolute first and later did the weight classes. First match was against a black belt and I went out and RNC’d him. Then I got a mounted arm bar on the purple belt and won against a high level brown belt – I had a kimura behind his back but the buzzer went, and then I had the finals against Ross Nicholls. It’s funny because it was almost absolutely delusional. I thought it would be impossible for me to win.”

MacQueen beat Nicholls on points but with the 30-40kg size difference it was a respectable loss for Ross and a great win for Mark. MacQueen expands, “It was good. Obviously he is like a million times better at jiu jitsu than I am, like he just obviously is. He pulled guard and it was a case of he couldn’t do anything to me; move me or get under because I’m just too big. He’s probably just under 75kg, so I have the best part of 30-40kg on him. I just think I was too big to really do anything to. I got past his legs a few times, but just his jiu jitsu – his guard retention, his frames, he was absolutely amazing.” Alongside the win, MacQueen was also awarded his purple belt from coach Marcos Nardini.

Did Mark click with BJJ straight away and find it easier with the weight advantage, or did he have that same ‘wtf’ period as everyone else? He says, “I’ve only been training for two years. When I think of myself, I still feel like a beginner. I don’t actually think I’m any good at jiu jitsu but I must be doing alright.” MacQueen continues, “For the first few months I remember thinking I don’t actually know what the point of jiu jitsu is. With jiu jitsu – what’s the goal? Where do you go? Where do you end up? It was really weird. But then 4-5 months in I did my first competition and that’s when it first started to really make sense to me.”

As well as obviously being incredibly strong, MacQueen works for it. Coming up to the competition MacQueen trained BJJ six days a week, weights three days a week as well as wrestling two times a week. Training with the high level black and brown belts at his gym like Marcos Nardini and Jack Brown, MacQueen refers to training as “Every day is like a competition day.”

Whats Next for Mark MacQueen?

Right now there’s two competitions he has lined up in the pipeline; the Scottish Championships on Sept 4th and SGI in October; MacQueen also fancies his shot at the No-Gi European Championship. Could this be a new face, and another strong Scottish addition to the pro BJJ scene? Only time will tell. He says, “Whoever’s next.”