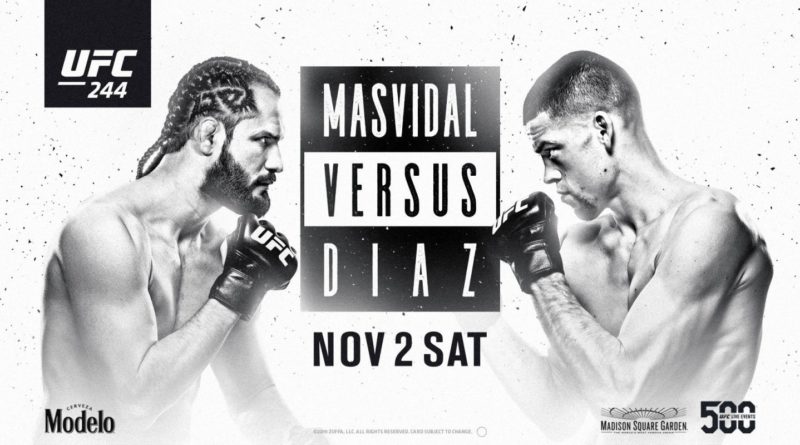 The Grappling Insider team will have live UFC 244 results all night, from the prelims to the main event, for the first ever “BMF Belt” between Nate Diaz and Jorge Masvidal. The main card with be available exclusively on ESPN+

Grappling Insider has been covering UFC 244 all week Here’s a roundup of some of our best content:

In order to make weight for UFC 244, Kelvin Gastelum used his elbow to lean on his coach.

Love Him or Hate Him, You Really Should Not Be Excited to See President Trump at UFC 244.

Jorge Masvidal: “I’m too much man” for Conor McGregor

Apparently the guy awarding the belt is called “The Rock” and is an actor of some note. Guy is built like a tank, shame he never got into fighting.

Crowd is going insane, walk out songs are perfect, MSG is putting on a helluva light show, the freaking President is here. This is a moment for the sport.

Dominick Cruz getting insanely deep during walk-outs. Talking about how society has purged the savage out of us and that these men are the last free men.

Or something. Let’s get to the fight:

Masvidal faux charges Nate out of the gate and gets a reaction and a laugh from the crowd. Jorge lands an elbow and follows up with a monster hook. Nate backs up and tried to duck into a kick and eats it in the face. Nate in big trouble early. Jorge attacking from the top and it’s almost stopped. Nate recovers guard and eventually gets up.

Nate very bloody but what else is new? He recovers and starting snapping jabs and tags Jorge a few times. Jorge takes the round but Nate is still in it.

Round two, Jorge has the speed advantage for sure here. It’s his power verses Nate’s volume. Jorge scores a knockdown and Nate flips him the bird but Masvidal let’s Nate back up. Jorge taggs him with some vicious strikes and Nate is barely hanging in there. Masvidal takes the back on the feet and Nate spins for a heelhook before the round ends.

It’s round three and Nate is looking very busted up. He’s eaten lots of shots and needs a miracle here. Diaz backing up, not moving forward like you would expect of him.

Nate showing signs of life again, landing some combos on Jorge, who is ripping off huge kicks and punches still. There is a viciousness in Jorge that I don’t see in Nate tonight. I think Masivdal is up three to one.

Oh no, doctor is taking a hard look at Nate Diaz. Diaz keeps saying it’s good. Doctor giving it the side eye.

Good lord, this fight has been called off due to Doctor’s stoppage.

Kelvin Gastelum vs. Darren Till

Lots of clinch work in the first half of the round and the crowd is not having it. They might be a little spoiled after so many great fights tonight. Neither man is able to get much off. The round closes with Till awkwardly adjusting his cup in the center of the octagon. The chat is having fun with it.

Round 2, both men are trading shots now. Till seems to have a narrow edge with timing. Till is also working some nasty leg kicks. Till looks strong at middle weight, actually bigger than Kelvin. Crowd is booing but I don’t know why. Darren Till is using smart footwork and solid kicks. Kelvin’s leg is starting to swell.

Round three is starting and Kelvin may be down two to one. Kelvin goes for a double leg and has a strong entry but it’s like trying to tackle a wall. Darren is just too strong. Kelvin is narrowly missing with big shots. Till awkwardly adjusting his cup in mid round now. Rogan is picking up on it. Both men trade takedowns that don’t amount to much. Till is catching kicks and Kelvin finally hits his double leg. Round is up, this one could go either way but Till probably did enough.

Darren Till wins via split decision

Luque has a strong first round, able to dart in and out of range and tag Thompson a few times. Wonderboy was stunned by a few and looked like he might be in trouble but recovered.

Right away Thompson looks better in round 2. He is being creative with his combinations and Luque is looking a little mesmerized.

Boom, Wonderboy hits a shot and Luque shows signs of being hurt. Thompson turns on the kicks, hunting for that signature finish. Luque is recovering and standing in the pocket, and the war is on! Lots of action now. Luque is taking shots and giving some back in return. Round is over, looking like round three is for all the marbles.

Third round is all Thompson, who picks Luque apart with all sorts of strikes. He knocks down Luque and pummels him on the ground before letting him back up. He finishes off the round showing us all how kickboxing should be done.

Both men lumber to the center and keep a very respectful distance. It feels like the first person to land will win here. Lewis throws a leg kick against the sambo champion and is immediately taken down. Ivan passes guard but Lewis recovers and the two return to the feet. Lewis is throwing hard punches in retaliation but Ivanov clinching and trying to nullify. The rest of the round passes without much action, but you can feel the tension.

Lewis’ corner scolds him for kicking between rounds. Round 2 begins and Ivanov is dodging haymakers by just a few inches. Lewis clips him and Ivanov is stunned, Lewis smells blood and charges in with huge strikes. Ivanov gets a leg trip and immediately locks in an Americana from side mount. It’s tight and probably tore some muscles but Lewis guts it out and manages to get back to hit feet.

Lewis is punishing again with strikes and enough are landing that even Ivanov can’t withstand this for long. Lewis is tripped again and taken down to end the round.

Third round and this is a classic brawler vs Bulgarian sambo fighter now. Lewis slowing a bit but overall his cardio is leaps and bounds above where it’s been. Lewis hold off a few more leg trips and seems like he lands more than he takes. Ivanov is not as active now. A late flurry from Lewis probably secures the round.

Both men come out in a low stance, looking like they’re thinking about takedowns. After a feeling out period, the strikes get a little more serious. Gregor wants a takedown but Lee has a solid stance and is ready for the shoot.

At about two minutes in, Kevin Lee pops a jab and fires off a beautiful head kick. It lands clean and Gillespie is out immediately. We’re talking, eyes open, dead body kind of out. The replay is the stuff of nightmares. Kevin Lee is back, new camp, new fighter.

The 205 golden boy is caught early by an Anderson right hand. Corey displays amazing killer instinct and unleashed a torrent of strikes on Johnny Walker, getting a standing TKO within minutes of the opening round. Anderson is fired up, yelling at the camera and the tape delay is coming in handy tonight!

Burgos weathers an early storm and overtakes Amirkhani in the third, turning in what could have been a 10-7 round for an eventual knockout.

Jairzinho tags Andre in the opening seconds of round 1 for a flush KO, extending his 9-0 winning streak.