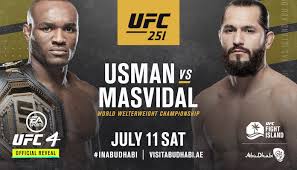 Just a few weeks after the Usman vs Masvidal negotiations fell apart it looks like Masvidal has found his way back into the mix as the headliner of UFC 251 after Gilbert Burns was dropped due to a positive Coronavirus test result. Masvidal will now have to be tested and pass all Coronavirus precautions to be eligible. Also, there may be complications getting Masvidal cleared to fly out to Fight Island on such short notice. However, it has been rumored that the established UFC 251 lineup of fights will take place on Fight Island as planned but if Masvidal can’t fly out in time the UFC may conduct the Usman/Masvidal fight at the Apex Training Center. As odd as this sounds it would not affect the viewers much because the fights are being fought in empty venues anyway. Therefore, with a simple switch of cameras the viewers could seamlessly be transferred from the venue on Fight Island to the Apex with little trouble.

On fight night he big question is going to be Masvidal’s fitness. Has he been training? Is he ready to give 100%? If he is not in prime shape can Masvidal go five hard rounds with the man who outlasted the self proclaimed Cardio King, Colby Covington, in his last fight? Whether one enjoys Colby’s pro wrestling, over the top, schtick or not his cardio is legitimately top of the food chain…and Usman matched Colby’s high pace blow for blow.

An interesting secondary story is how closely Masvidal’s career is paralleling Michael Bisbing’s. For both of their careers they trudged along as what one might call high level journeymen. Then, at the tail end of his career Bisbing gets a last minute title shot against Luke Rockhold after Chris Weidman pulls out due to herniated disks. The rest is history as Bisbing pulls off a spectacular upset as he knocks Rockhold out cold in the first round. It is a bit eerie the similarities between Bisbing/Masvidal’s last minute paths to title fights after long careers as gate keepers. Either way after 48 fights and an impressive career resurgence Masvidal finally has his chance to walk out of the ring as the 170 pound world champion.

Rafael is a four stripe purple belt. He is primarily a guard specialist. He has heard rumors there are take-down techniques but remains unconvinced as to their viability.

Rafael Deo has 4 posts and counting. See all posts by Rafael Deo