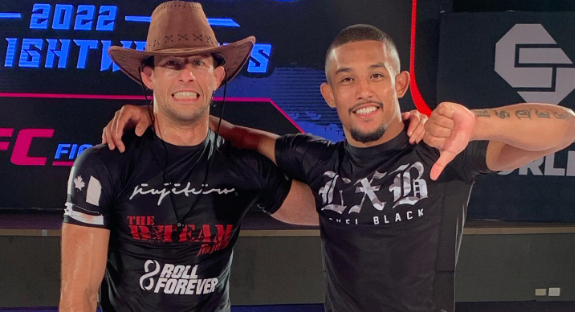 Combat Jiu-Jitsu Worlds 2022: The Lightweights took place on Sunday, June 5. In the opening round of the tournament, B-Team representative Damien Anderson scored one of the most brutal knockouts we’ve ever seen in combat jiu-jitsu, as he “slapped” Adrian Madrid completely unconscious with a pair of palm strikes directly to the chin.

Check out video of that knockout below.

Anderson would go on to defeat David Weintraub in the quarterfinals before losing to his teammate (and tournament champion) Ethan Crelinsten by way of armbar in the semifinals.

Formerly a member of the Danaher Death Squad, Anderson is a top athlete out of B-Team and one of jiu-jitsu’s fast-rising stars. He is a multiple-time Who’s Number One veteran and a fixture of the elite no-gi scene. Earlier this year Anderson made waves at the ADCC West Coast Trials where he made it to the semifinals and had a match of the year candidate against Andrew Tackett.

This was Anderson’s first time competing in combat jiu-jitsu, and with a performance like that, it seems safe to assume he’ll be back.