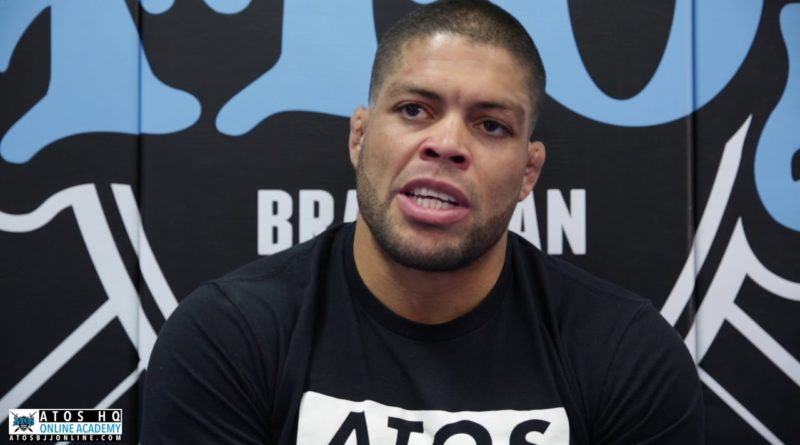 Andre Galvao recently uploaded the above video to the ATOS Jiu-Jitsu Headquarters’ Youtube channel where he discussed how often a competitor should be training. Now, first of all it’s pretty clear that Andre Galvao is talking about the level of training that the top competitors will need to be doing in order to win and that this isn’t what you’d need to become a competitive hobbyist on your local scene.

“I think a competitor needs to train a lot because you want to have the best result in the tournament so you need to train at least twice a day in Jiu-Jitsu and you need to have conditioning as well. Strength conditioning aside and I think it’s really really important and maybe like you can do like two to four times a week in conditioning some type of cardio as well I know like people say “oh you should like row a lot to get a better cardio” but I think like when you do it a different type of cardio such as running or bike or maybe even just going to a nice place and all the beach and everyone is swimming, I think you improve your cardio. So I think for a competitor you need to add some type of training that will increase your cardio you know because it’s really important you can have all the techniques right but if you don’t have a good conditioning it’s gonna be hard for you to apply the techniques during the fight especially like under pressure so you have a lot of pressure going on during the tournaments.”

This advice comes directly from the first man to ever win the ADCC Superfight Championship a phenomenal four times in a row as of last year. That’s on top of his incredible performance at ADCC 2011 that led to his Superfight opportunity, when he won gold in his weight and the Absolute division. Given that Galvao’s team, ATOS Jiu-Jitsu, has been represented by some of the best grapplers around like Keenan Cornelius or the incredible Ruotolo Twins, it’s safe to say that this is pretty sound advice for those looking to compete at the highest level.