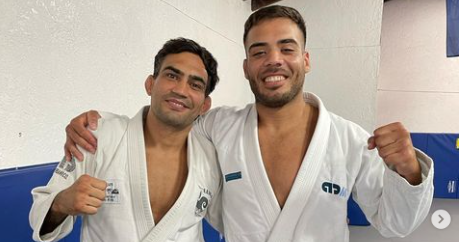 Just a couple of days ago, Elder Cruz might have been the best brown belt in the world. That’s not the case any more, as the elite no-gi competitor was promoted to black belt in BJJ on Monday.

Got my Black Belt Today from @lucasleitebjj 💪🏽👹❤️ thank you Lucas for everything you’ve done for me since white belt and guiding me towards this moment that seems like only the beginning of my great legacy. Thank you to everyone that has been a part of my journey and helped me out. I burned the boats to get to where I’m at and I haven’t looked back. Im going to continue to Work Hard and Believe in myself no matter what. Beyond grateful for everything grappling/ jiu jitsu has done and continues to do for my life. I’m truly blessed. Thank you God

Cruz won just about everything there is to win as a brown belt, including gold at the 2022 IBJJF Worlds. Outside of IBJJF competition, Cruz has been competing at an elite level in no-gi. Earlier this year, Cruz picked up a split decision win over ADCC silver medalist Nick Rodriguez — arguably the biggest win of Cruz’s still-young career. Before that, he placed second at the ADCC East Coast Trials. Those efforts earned him an invite to the ADCC World Championships in September.

Cruz is known for his excellent wrestling and relentless pace, particularly when passing guard. With that skill set, Cruz has openly discussed soon transitioning to a career in MMA.

Many congratulations to Elder Cruz on this achievement!