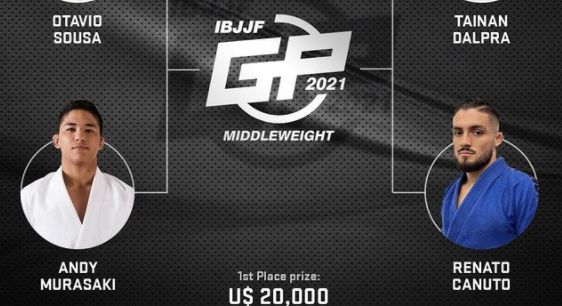 The 2021 Jiu-Jitsu Con hosted by the IBJJF will take place on Nov. 10-13 in Las Vegas, NV. The event will feature a pair of four-man tournaments, each with $20,000 on the line. The four middleweight grand prix competitors have now been announced.

Tainan Dalpra: An Art of Jiu-Jitsu representative, Tainan Dalpra is barely a year into his black belt career, but has already captured a Pans gold medal and is considered one of the best gi competitors in the world. He holds notable recent wins over Ronaldo Junior, Matheus Luna, and Jeferson Guaresi. Dalpra’s lone loss at black belt came against phenom Mica Galvao at EUG 2.

Renato Canuto: Fresh off winning the Third Coast Grappling 180-pound grand prix (a no-gi event), Checkmat’s Renato Canuto will look to maintain his status as one of jiu-jitsu’s most entertaining grapplers. He is a no-gi world champion, and was a silver medalist at the 2018 gi Worlds. Canuto is offensively minded in all positions, including on the feet where he is known for his trademark flying submissions.

Andy Murasaki: Andy Murasaki is one of Atos’ top competitors and is one of the sport’s most promising young black belts. In his competitive debut as a black belt, Murasaki defeated Matheus Luna, Gianni Grippo, and Kennedy Maciel in one night to capture the inaugural EUG grand prix title. He has competed sparingly in 2021, but if his performance at EUG was any indication, Murasaki is a real threat to take home the gold here.

Otavio Sousa: The most experienced and accomplished competitor in the grand prix, Otavio Sousa is a three-time world champion and a four-time Pans champion. The Gracie Barra representative has not competed since 2020, but prior to his absence, he was beating elite competitors such as Matheus Diniz, Matheus Luna, and Gabriel Almeida.

How to watch: The Jiu-Jitsu Con middleweight grand prix will take place on November 13 and will air live on FloGrappling (subscription required).