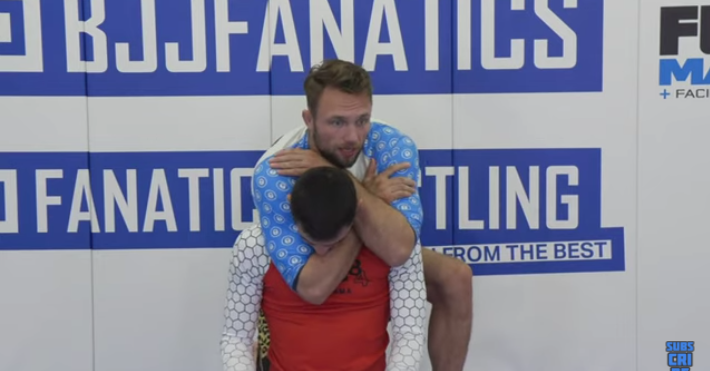 Craig Jones is one of the best no-gi jiu-jitsu competitors on the planet, so it’s no surprise that he’s also one of the sport’s most sought-after instructors. In recent video released by BJJ Fanatics, we see a clip of Jones’ instruction “The Anti Wrestling Equation.” In the video, Jones explains how to finish a rear-naked choke if the defending player tucks his chin — AKA the “mandible strangle.”

“I’m trying to get under the chin, but if he tucks it, it’s hard for us to get what a lot of people would consider a clean choke,” says Jones. “But in reality, you’re choking the carotid arteries and when he tucks his chin, he’s not actually protecting his carotid arteries…”

Even if the opponent tucks his chin, Jones says a clean choke can still be achieved through steady and properly applied pressure.

“I want to bring both of my elbows towards his pec, and then I apply donwards pressure to get that submission. We can still strangle Placido through his chin as long as we have downwards pressure and slightly across to his pec.”

Because this technique will hurt the face before the choke sinks in, Jones says that many grapplers will tap early in practice. In competition, though, the grappler applying the choke should be prepared to squeeze with full force to get the tap. In order to do that, the attacking grappler must gradually apply more and more pressure on the choke.

Craig Jones was a member of the Danaher Death Squad prior to its breakup. He is undefeated in competition this year with wins over Ronaldo Junior, Luiz Panza, and Tye Ruotolo. He is set to compete next at the Who’s Number One championships as a part of the 185-pound division.