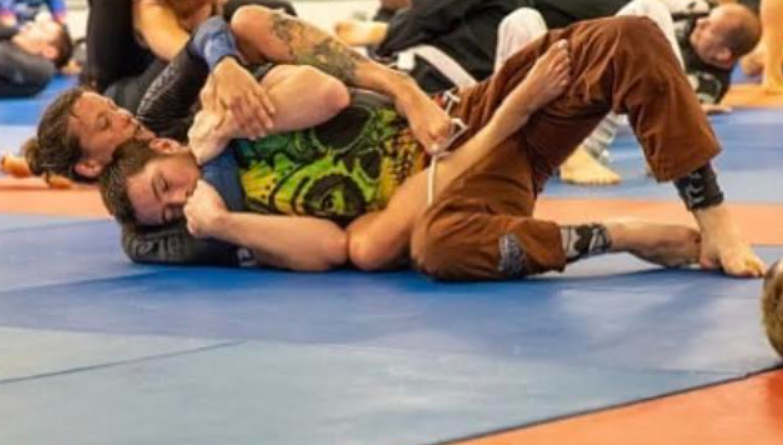 Danielle Tighe is a ferocious BJJ purple belt competitor from East Sussex, England fighting out of Revolution Martial Arts, Kent under 1st Degree Black Belt Steve O’Keeffe at Checkmat. Tighe has trained BJJ for around four years and was awarded her purple belt on the podium at the IBJJF European Championship 2020 in January. Tighe claims this was her proudest moment in BJJ, “It was definitely on the podium getting my purple belt from Steve (O’Keeffe) and Marco (Canha). That was at the Euros. I won gold. I went out there knowing that I was going to win. I never have that normally. I’m always nervous, and I went out there knowing I would win – but I didn’t know that I would get graded or anything.”

Tighe began competing three months into starting BJJ, having had no previous experience in martial arts before, and that was where her passion from competing began and her love for the sport really blossomed. On the day of her first comp she was sick before from nerves and states, “I lost the first fight and thought that was it, it was over, so I started to walk off and he (O’Keeffe) was like ‘no you have to fight again!’ Won the second one, won the third one, so I got silver in the end and I think it was just a hook. It just hooked me from there.”

Most competitors tend to have a preference when it comes to Gi and No-Gi, Tighe says, “In the early days – Gi but now definitely No-Gi. I love No-Gi. I think with Gi I find it quite restrictive, I find it slow, I find that Gi can be so precise with grips and stuff. But I find with No-Gi it’s more of a scrap. I like that sort of scrap. I find it more free. I like the freedom in No-Gi. I love No-Gi.”

When describing her fight style Tighe jokes, “I’d like to say I’m great at takedowns but I’m not. In my head I like to think I am. I find it really impressive when somebody hits a flawless takedown.” Tighe continues, “ I love doing naughty things like grabbing ears and stuff like that, smothering, I think that comes from Steve because that’s an MMA type thing. I love standing on people’s limbs: I will literally stand on an ankle, stand on an arm, or whatever. I love stuff like that. I just like being nasty.”

Being a back attack fan, the RNC is obviously Tighe’s favourite submission, she expands, “ I like getting on the back. Once I’ve had enough of messing about, upsetting them, I’ll start to slip under the chin and finish.”

“My dream would be to go on to Grapple Fest. That would be brilliant.”

One female fighter Tighe would like to have a grapple with is American black belt Elizabeth Clay, a fighter who she looks up to. Due to the covid pandemic in England competing has pretty much been off the cards for the past 12 months, and although Tighe had a fight lined up on Battle Grapple, her opponent unfortunately pulled out a week before. However, she has plans to go to Sardinia, Italy to compete in September and aspires to one day have a fight on Grapple Fest. “Battle Grapple fight got cancelled because the girl backed out about a week before hand so I never got to go on that. My dream would be to go on to Grapple Fest. That would be brilliant.”

Grapple Fest – Are you hearing this?! Danielle Tighe – One to Watch.