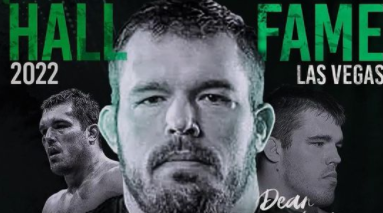 The ADCC — commonly referred to as the “Olympics of submission grappling” — continues to grow its official Hall of Fame. On Monday, the organization announced that leg lock pioneer Dean Lister has been inducted into the ADCC Hall of Fame, joining legendary competitors like Marcelo Garcia, Roger Gracie, and Braulio Estima.

Given his prodigious accomplishments in ADCC competition and his contributions to the sport overall, Lister seemed like a shoe-in for the Hall of Fame. At the ADCC championships, he won the absolute division in 2003, an ADCC superfight against Jean Jacques Machado in 2005, and his weight division in 2011.

Lister holds the record for the highest submission rate in ADCC history at 84%. To that end, he holds notable submission wins in ADCC competition over Saulo Ribeiro, Rodolfo Vieira, and Joao Assis.

Beyond his on-paper accomplishments, Lister is also often credited with demonstrating the power of leg locks in high-level competition, thereby exposing a weakness that many grapplers had in the early and mid-2000s. Lister is famously known for the quote “Why ignore 50% of the body?” — something he told to John Danaher, prompting Danaher to focus on leg locks in his teaching, which ultimately led to leg locks playing a key role in the submission grappling metagame.

Outside of grappling, Lister also enjoyed a successful MMA career. Now retired with a record of 13-7, he fought in the world’s most prestigious promotions, including Pride FC and the UFC. Lister’s last fight was a 2015 ankle lock win over Michael Knaap.