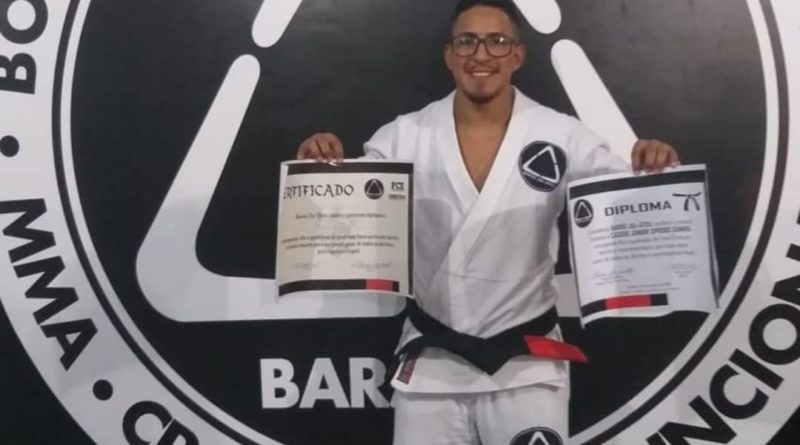 It seems like criminals never learn. That’s the first thing I thought when I saw the video of a BJJ black belt who put a mugger to sleep. I think it’s safe to say that every Jiu Jitsu practitioner’s beginning in the sport came through self defense. Say what you want about it, but this is the ultimate test for your Jiu Jitsu. Cássio Barão, the head coach at CT Barão JJ, had the chance to put his BJJ to the test when a mugger tried to rob a student outside his gym.

Barão is a Brazilian Jiu Jitsu black belt from Palmas, in the state of Tocatins, Brazil. He is the main coach at his gym, called “Centro de Treinamento Barão Jiu Jitsu.” A few days ago, he had a chance to see how his Jiu Jitsu worked in a real-life self defense situation.

Barão isn’t your average guy. He is not only a BJJ black belt, he is a long-time Muay Thai practitioner and an MMA fighter. He opened his gym in 2018, where he has been working non-stop with athletes and regulars. His Facebook page has a lot of before and after pictures of his students, which caught my eye. They seem to do everything from BJJ to kettlebells.

Here is how it happened

Now let’s get to what occurred a few days ago outside his gym. Apparently, an armed robbery took place very close to where Barão was teaching. The robber was hitting a woman, who was a student at Barão’s academy. She managed to scream Barão’s name, and he heard her calls for help in his academy upstairs. He rushed down with one of his students, who’s called ‘Ninja’ in the video.

When he got to the ground floor, the robber was holding a long knife and had a gun concealed in his pocket. Barão and his student quickly disarmed and subdued the man. Fortunately for them, the gun was fake, but the knife certainly wasn’t.

A video surfaced showing Barão on the suspect’s back with a fully locked body triangle, while trapping one arm. The suspect is unconscious. He has signs of having received at least two blows on his face, while Barão holds a one-arm strangle.

During the video, Barão explains that the woman is the mother of a disabled kid who also trains at his academy. Apparently she had just picked up the kid from the academy when the mugger attacked. The gym owner says he attacked the mugger in self-defense as the aggressor was holding a knife.

Barão also took to social media to provide an explanation of what happened with a video you can see here. In the video, Barão explains the incident and gives his point of view regarding the situation. This was what everyone wants to see in a “BJJ black belt puts mugger to sleep” type of situation. Below you can see a transcript of what he says in Portuguese in the video:

At some point she managed to scream my name and I rushed down the stairs and was able to help her. She’s a student from the gym so the first reaction was to help her. When we are faced with something like this some people freeze and some people act. Fortunately I was able to act, mainly because of my training.

We run towards him and disarmed him in legitimate defense. The guy was wielding a knife and a gun, but you could see from a mile away that the gun was fake because it was too small. But the knife was real and it was big. Luckily me and ‘Ninja’ were there and we disarmed the robber.

I would like to take this opportunity to remind everyone, men or women, that if you face a similar situation there’s one crucial thing to do. The best thing is to hand everything the robber is asking from you. Hand over your cell-phone, your car keys, anything can be substituted, except for your life. Luckily God was with us that day and nobody got hurt.”

What we learned from this

I think Barão’s message at the end is the most humbling of all. I could say the “BJJ black belt puts mugger to sleep” part is the best, but I wouldn’t be giving it justice. Even after handing a whipping on the robber, the man was quick to say that it could have gone differently. And he doesn’t recommend anyone try what he did. This was the perfect way to wrap things up with his video. If you respected him for controlling and disarming an armed robber, you should respect him even more for what he said afterwards.

Regarding the incident, it is fairly obvious that Barão subdued the guy in order to help his student. It’s also pretty clear that he is controlling the guy instead of harming him any further. It’s amazing to see how even though the robber pulled a knife on him, Barão simply subdued him without continuing to hurt him. The repercussions on the video were high, and even Rener Gracie shared the video on social media.

All in all, I think this is a great showcase of why everybody should learn BJJ and MMA in general. At least to the point of competency in grappling and striking. You never know when you will need to use these tools, but when you do, better prepared than sorry.