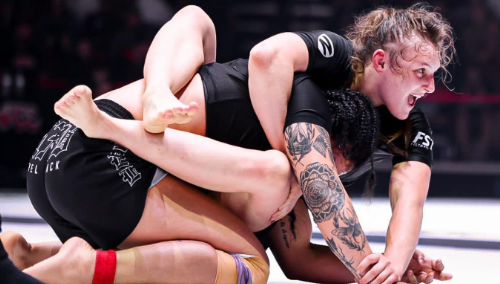 Amy Campo’s run through the 2022 ADCC World Championships was one of the most dramatic in recent memory. Just a little over a week after winning gold in the 60+ kg. division, the Zenith BJJ representative reflected on her victories and what owning an ADCC title means to her.

From her high-paced opening round match-up with dangerous leg locker Elisabeth Clay, to her instant classic against ADCC legend Gabi Garcia, to her tense come-from-behind win over Rafaela Guedes, Campo’s 2022 ADCC performance enthralled fans from start to finish.

Campo spoke to Grappling Insider, detailing the strategy, tactics, and technique that went into each match:

Campo’s semifinal match with four-time ADCC champion Gabi Garcia featured one of the most thrilling moments in ADCC history. A West Coast Trials champion, Campo was, on paper, the underdog to the much more accomplished veteran.

Campo explained her strategy against Garcia:

She will wait for her opponent to shoot and then she’ll sprawl really heavy and smash em’… You don’t usually just shoot a double leg on somebody bigger than you anyways, you usually cut better angles. I don’t want to be on bottom, and I know you’re waiting for me to shoot on you, so I’m just not gonna do that. I’m gonna try to cut different angles, try different takedowns. And I think our biggest gameplan was to get her to move. If she moves, she gets tired, and I’ve got more cardio, so I can go longer. She will break sooner than I break.

After nearly 10 full minutes on the feet, with the larger Garcia pushing and pawing at Campo’s head and neck relentlessly, Campo landed a clean arm drag takedown before quickly moving to mount, earning her the 5-0 victory over the reigning champion.

In typical ADCC fashion, the entire final exchange happened off of the mat as camera operators and staff rushed to follow the action.

Campo spoke about her mental edge going into that match:

Her pressure is intimidating to most people. But before that even happens, I feel like girls walk in there with fear already, super timid already, and the fight is already half lost at that point… I made sure that was the first fight I won, that there was never going to be any fear or intimidation from her.

In the final, Campo squared off with Grappling Insider’s 2021 no-gi grappler of the year, Rafaela Guedes. Known for her aggressive, physical style, Campo welcomed the “fight” with Guedes:

I was so in that fight. I was enjoying absolutely every second of fighting and the idea of fighting. There was a couple seconds where she was trying to cup my face, do a smother. I just remember smiling and pulling her hand off, like yes, let’s go, I’m so excited for this!

A black belt under Eduardo Mori, Campo has spent all of her career learning and training with one single team – an uncommon experience for most elite competitors.

Although she is with a relatively small team, Campo believes the key to her success has been the quality of her training: