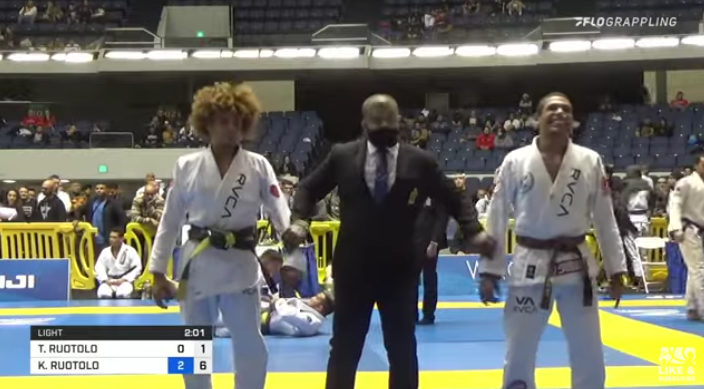 Make no mistake, twin brothers Tye and Kade Ruotolo do not support close-outs. So when the two were slated to face each other in the finals of the adult brown belt division at the 2022 IBJJF Worlds, they stayed true to their word and competed against each other in a high-paced, entertaining match.

Watch that full match below.

What we see above is the trademark Ruotolo style: aggression, creativity, and submission hunting in every position possible. We also see the Ruotolo brothers using a more no-gi type of game, with collar ties on the feet and aggressive leg locks on the mat.

Shortly after Worlds, the Ruotolo brothers were awarded their black belts from longtime coach Andre Galvao.

That type of evolution in their game makes sense, given the brothers’ recent success in no-gi competition. Kade Ruotolo was named Grappling Insider’s 2021 no-gi grappler of the year after capturing the Who’s Number One (WNO) title and collecting wins over the likes of Ethan Crelinsten, William Tackett, and Keith Krikorian.