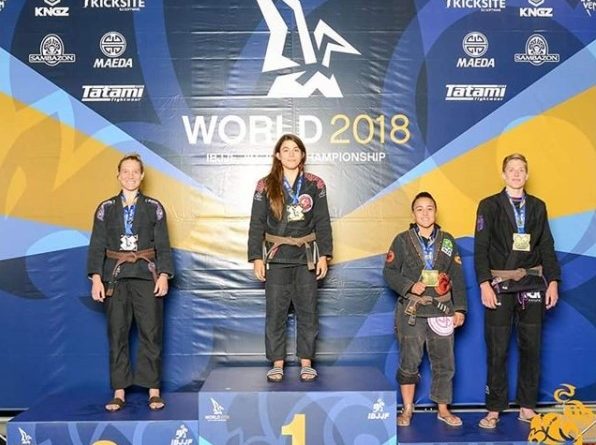 Third Coast Grappling Kumite 7 is the last event of the series that spans four months amidst a worldwide pandemic. The bracket is comprised of eight female black belts vying for the $10,000 prize. That is a powerful statement for equality in the sport. Eight world-class elite competitors showcasing the best of women’s Jiu Jitsu. This is part seven of an eight-part series featuring each of the athletes in the bracket. This is Jessica Swanson.

Jessica “Jessi” Swanson is the 2018  International Brazilian Jiu-Jitsu Federation (IBJJF) brown belt World champion in the Gi. She has won many other titles at black and the lower belts, most notably winning the Pan Ams for two consecutive years (2017 and 2018) at brown belt.

Born in July, 1996 in Connecticut, she was led to boxing and Jiu Jitsu classes at just nine years old by her older brother. When she turned 15, she focused exclusively on Jiu Jitsu. By this time, she was already training at Soul Fighters under Rafael “Formiga” Barbosa. Training and competing did not get in the way of her education and other life goals. She graduated with a BA in International Political Economy and Diplomacy. She added some experience to her degree, spending a few years in Korea for her East Asian studies. No time was lost in terms of Jiu Jitsu, however, as training continued while she was there, with the occasional trip to the Soul Fighters headquarters in Brazil.

These days, she teaches and trains out of BJJ Lab, a Demian Maia academy in Naperville, Il.

One of the rare few who compete at the world stage and not forsake her education, Swanson managed to balance the two. She continued to place on the podium at competitions, both local and international as well as “superfights.” Among her podium finishes at black belt include, but are not limited to, winning gold at New York BJJ Pro in 2019 and São Paulo BJJ Pro in 2018. Her stellar performances that year was punctuated with getting her black belt on the podium at the Worlds 2018, where she won gold.