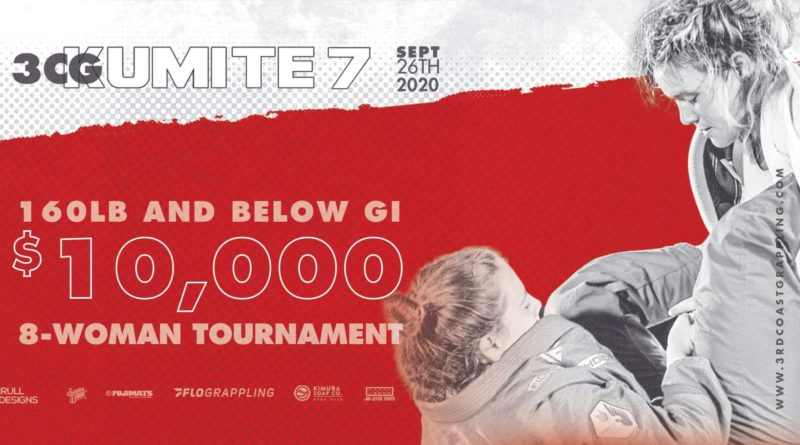 Eight women. 18 world championships (Gi and No Gi combined). One “Queen of the Kumite.” To cap off the successful Kumite series, Third Coast Grappling (3CG) chose to have an all-female bracket. The competitors are all decorated, exciting representatives of women’s Jiu Jitsu. As the other Kumites went, $10,000 goes to the champion, but there is an additional incentive for this finale. As 3CG President Ryan McGuire described it: “Gamblers Jiu-Jitsu/Mike Cipriani will be paying every winner of each match including the final a nice crisp $250.00. Mike has always had a big heart for Women’s Jiu-Jitsu and has done a ton for many in the sport. He saw this bracket and said hey I want to sweeten the pot a little bit lets get each tourney match winner paid as well. We said say no more.“ That means the Kumite Queen wins the title and $10,750. Read on for the breakdown of each first round matchup.

De Jesus is ranked second among all female adult black belts in the IBJJF, with a 660-point lead from third. She has five IBJJF World championships to her name at black belt alone, with many more at the lower belts. She regularly competes at middleweight. Bishop has one IBJJF World title at black belt No Gi and regularly competes at featherweight. Both compete at absolute divisions, but De Jesus has a winning track record and size advantage. Bishop has stamina and athleticism to her credit, so expect a barn-burner.

Vieira is ranked 13th, but that is not reflective of her track record. Having just opened her own academy, she has competed less in the past year. She has four IBJJF World titles at black belt in the Gi and No Gi. While Reyes is not as high-profile as Vieira, her bio belies it: “She has over 15 years of competition from winning No Gi Worlds, Pam Ams, and World Pro Abu Dhabi” [sic]. She also has an amateur boxing champion and competes in Muay Thai as well. This is an interesting match-up of different styles and expressions of Jiu Jitsu.

Monteiro is ranked 10th among all female adult black belts in the IBJJF. This belies her track record as she has a combined total of five IBJJF World championships as a black belt. A middleweight, she also competes in the absolute division. Swanson has yet to earn a World title as a black belt, but she has one in the brown belt division. She is also a middleweight who competes in the absolute division. This will be a classic showdown of the old guard versus the new.

The 2019 Worlds gold medalist (Gi) Cintra meets the 2020 World No Gi gold medalist in the first round. Both are Checkmat black belts, although Cintra switched teams to Gracie Barra after getting her black belt. Ribeiro normally competes at 129 pounds and Cintra at medium heavy, but both compete at absolute divisions. Both hungry and eager to elevate their stature and profile, expect an exciting match of two young and talented Jiu-Jitsu champions.