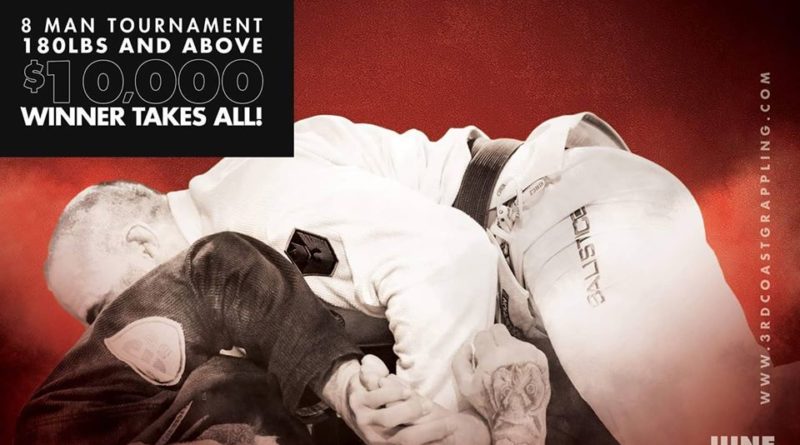 The dust has not even settled but Third Coast Grappling is back at it, striking while the proverbial iron is hot. Third Coast Grappling: Kumite 2 is set for June 20th, exactly two weeks after their first ever Kumite event, and the bracket is as stacked as 3CG events come:

Fresh off of bagging the prize in the first Kumite event, Gustavo “Braguinha” Batista (ATOS) is hungry for another go at the big check. Igniting what promises to be an explosive superfight bracket, the reigning 3CG Kumite I champ’s first match will be against the COVID-19 California lockdown dissident Tanner “the Ginger” Rice (Rice Brothers Jiu-Jitsu). Both medium heavyweights, it’s hard to believe that this will be their first match against each other (discounting early rounds in IBJJF tournaments).

One of three competitors in this card celebrating their first anniversary as a black belt, Jake Watson (Maracaba BJJ) returns from the previous 3CG:Kumite I. This time Watson is paired against a fellow desert-dweller — the straight-shooting, straight ankle-locking Fellipe Andrew (Zenith BJJ). This will be medium heavyweight Watson’s first time to be matched against the heavyweight Andrew, who just headlined another main event. Expect an action-packed match.

Bring out the seismograph for this battle of behemoths. Ribeiro Jiu-Jitsu prospect Victor Hugo — also celebrating his first black belt promotion anniversary this month — is no stranger to the podium, having won gold at the 2019 IBJJF No Gi Worlds in the open weight category as well as major IBJJF tournaments at every belt rank since 2016. The ultra heavyweight, fresh off of a stellar performance at Fight 2 Win 143, is expected to show off his well-rounded skill set against decorated veteran and recent Houston transplant Ricardo “Jegue” Evangelista (Grappling Fight Team, Renzo Gracie Houston). The 3CG:Kumite II stage is going to be the epicenter of what could be a classic battle of the new guard versus the old guard.

ATOS up-and-comer Jonnatas Gracie is another one celebrating his first black belt promotion anniversary this month. The game André Galvão protege has been highly competitive at the highest levels since he was a blue belt. Although Galvão only took him under his wings as a purple belt three years ago, this well-rounded scrambler has been an ATOS flag-bearer in big events since. His first match is against one of Gracie Barra’s rising stars, guillotine grantor Pedro Marinho, who has been tearing up the competition and superfight scenes as a brown belt besting black belts. This will be Marinho’s third appearance on a Third Coast Grappling event. This has all the makings of a dynamic showdown between two aggressive competitors who are both willing to go up against anyone at any rank.

The full event will be streamed live on FloGrappling on June 20th, click here to sign up and watch.