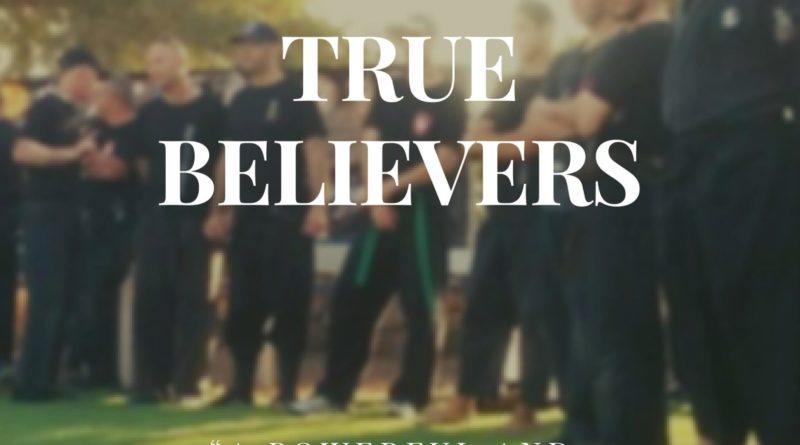 Like most of you, I can only attend so many Zoom workouts, YouTube technique videos, and free instructionals during these quarantine days.

Despite the overwhelming amount of BJJ content, there’s actually not a lot of fiction or creative nonfiction books about training out there, so when I saw the “McDojo Life” Facebook page talk about this “True Believers” book, it was just in time as I just can’t absorb any more technical content.

I should mention that True Believer’s author, Louis Martin, is a semi-regular writer here at Grappling Insider. He’s done our live event coverage, and some great interviews with names such as Eddie Bravo and Tom DeBlass. With the release of his book on Google Play Books, he gave me a free ebook copy, and I figured I should at least post my thoughts since his 300 page read managed to kill a day and a half for me.

Louis also doubles as the owner of “High Percentage“, the website where he compiles statistical data on BJJ matches. If you’re into data and stats, you should check that out too. It’s ironic that a guy now known for pushing the science of BJJ actually came from a disturbingly cultish traditional martial art. I’ll chalk it up to the whole “rubber band effect.”

True Believers and the bizarre world of “Seibukan Jujutsu”

True Believers is a true story that reads like a novel. Some of it is so crazy, I didn’t believe it until I looked up youtube videos like the one below to see it for myself.

Obviously if I herd about it from McDojo Life, you know there’s going to be some crazy fake martial arts stuff in it. But you might be surprised how minor that aspect is in the story.

True Believers is more about a brainwashing cult masquerading as a martial arts organization, tapping its most fanatic students for thousands of dollars, handing out black belts in literally days, worshiping animals, and turning their leader into a God like figure. And yes, there’s even the inevitable sexual abuse of junior students, although Louis seems to deliberately hold back on that aspect of the story, which he says is to protect the privacy of the victims.

Seibukan Jujutsu began in the early 90’s as just another traditional martial arts school. But by the time Louis arrived in the 2000’s it was well on it’s way to becoming a full on religion. It wasn’t a small gym ran in a backyard either, at it’s peak in the late 2000’s, it had dozens of schools in the US, Europe, and Central America. I found pictures online showing over a hundred students in a single class, nearly every one a black belt.

The system that Seibukan used to turn students into a faucet of cash flow is fascinating, and will probably particularly alarm BJJ practitioners accustomed to training years for a single promotion. Not only would students pay progressively more for belts, up into the thousands of dollars, but special programs allowed them to be promoted ever faster for a monthly fee, which ran about $500 a month. It had students literally paying money for the privilege of paying more money faster. The author himself got his first black belt in nine months, noting that he actually felt a little behind other students. The competition fostered between students for rank and the attention of their founder, Julio Toribio, is a driving force of the organization. Toribio is described as having an incredible charisma, almost hypnotic. He recruited an army of lost souls, most of them very young, and gave them something to live for.

By 2010, Seibukan Jujutsu had become a more closed society. Louis describes a complex system of secret language, code words, and a religious system cleverly disguised within the martial art itself. It was all tied in with rank and progression, meaning that as you were promoted, you were also ascending up an enlightened pathway.

It’s worth noting that the actual martial arts studied, all Japanese Jiu-jitsu based, seemed largely about showmanship and fantasy than any real fighting skills. Louis describes his first run in with a BJJ blue belt. After being predictably humiliated, it sets up the major conflict of the story. Louis, now a black belt and instructor in Seibukan, begins to realize that the martial art he teaches is a lie, and wonders what else is a lie. It’s here that the book takes a sad turn, as you see the effects of codependency and group think for the eyes of someone struggling to overcome years of programming.

Probably the most compelling aspect of the book for me was the author’s internal debate about his own culpability. Louis acknowledges that at a certain point, he was complicit in teaching dangerously ineffective skills to young people. This included women who were ultimately being victimized by their own teachers without his knowledge. He also puts forth the theory that it is largely the students, not the teachers, that create the cult. It’s called codependency for a reason, I suppose.

There’s a bunch more wild stuff I didn’t even get to. From a failed reality show production to half the dojo getting involved in a pyramid scheme. I won’t spoil the ending. But as soon as I finished the book I googled the original Seibukan Jujutsu dojo in Monterey, California to see for myself. This prompted about an hour long drive down an internet rabbit hole. The book is written in a conversational language. It goes from funny stories to moments where I face-palmed at the stupidity of it all. It’s an easy read and one that may make you think a little harder about idolizing your favorite teachers.

You can buy True Believers on Amazon or Google Play Books.