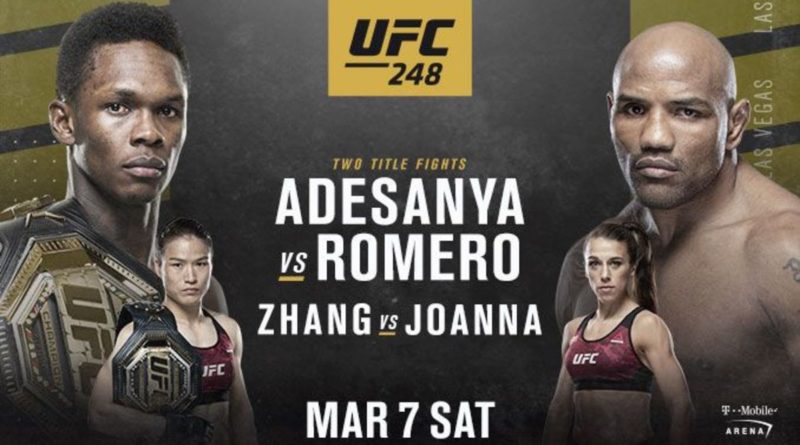 This Saturday UFC 248 will go down in Paradise, Nevada. Headlining the card is Israel Adesanya v Yoel Romero, where the champion Adesanya defends his Middleweight title for the first time.

Adesanya is a fascinating figure in MMA. As a former elite-level kickboxer, he is perhaps proving that the age of the specialists has not quite ended. He exploded onto the scene with his first UFC fight in the beginning of 2018 and less than two years later he was champ. He has yet to lose a professional MMA fight.

Yoel Romero has a similar oddball past. At 42 years old, he is bizarrely best known for his freakish physique, with past opponents claiming he felt like concrete. Although he is a former Olympic wrestler, he doesn’t show it much in his offense, preferring to use his incredible power to find the knockout. Against a skilled striker like Adesanya, though, it might be wise to try to take the fight to the mat.

Another new champion is looking for a title defense fights in the co-main event. The Women’s Strawweight title has been passed around a bit of late. First Rose Namajunes took it from Joanna Jędrzejczyk, who until then had seemed unstoppable. Then Jéssica Andrade took it from her with a brutal slam KO (off of a Kimura that Namajunes insisted on holding on to). And then Zhang Weili shocked the world with a 42 second KO over Andrade to become the first Chinese UFC champion.

Jędrzejczyk will be looking to win back the title she’s missed for so long this Saturday. As a veteran former champion, we know so much more about her fighting style than we do the new champion. Zhang obviously has tremendous power for the division and likes to come forward, but will Jędrzejczyk be able to find the counter? (Jack Slack, a very technical analyst, has an excellent breakdown with far more details on the matchup.)

Sean O’Mally, another fan favorite, is finally back after a failed drug test caused him to miss UFC 229. He is once again slated to fight Jose Quiñonez at the top of the Preliminary card in UFC 248 and it’ll be a little more interesting after Quintet Ultra showed us that he has isn’t just a striker.

Most interesting, perhaps, to the readers of this site: Rodolfo Vieira is back for his second UFC appearance. He more than met his fans’ high expectations with an arm triangle victory over ADCC veteran, Oskar Piechota, improving to 6-0.

He finds himself up against Saparbek Safarov has a strong wrestling and combat sambo background, so he should not be easy to take down. Additionally, 6 of his 9 professional wins come by way of knockout. Having fought previously at light-heavyweight, the usually physically imposing Vieira might not have an easy time pushing his opponent around.

As is usually the case when a decorated BJJ blackbelt gets in the cage, it comes down to the takedown battle. If Piechota manages to sprawl and brawl effectively, he might be able to find a knockout. But every second he spends underneath Vieira he is in danger of being finished.