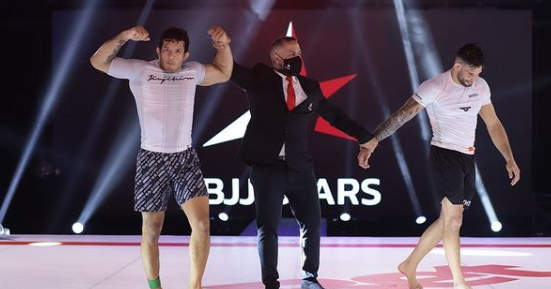 In the final seconds of the match, with Barbosa ahead by two points, Diniz secured a one-armed choke from a crucifix position. Seconds later, Diniz released the hold to show that Barbosa was entirely unconscious. The problem? Although the referee had not yet stopped the match, the official clock showed that by the time Diniz was deep on the choke, time had expired. Despite the difficult look for Barbosa in the match’s final seconds, he walked away with a 2-0 victory over Diniz.

Check out the video below to see how it went down, courtesy of FloGrappling.

With the win, Lucas Barbosa now holds an impressive 5-1 record against Matheus Diniz, who is unequivocally one of the best jiu-jitsu players in the world today. Both Barbosa and Diniz are scheduled to compete at next month’s Road to ADCC event, where Barbosa will face Craig Jones and Diniz will face Kaynan Duarte.