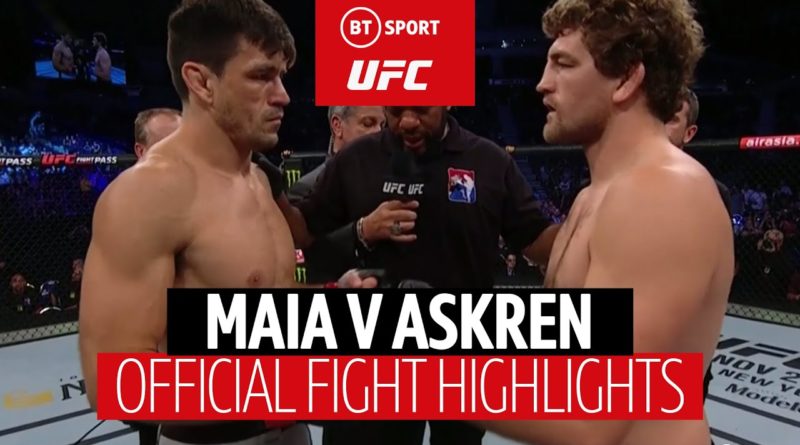 MMA is a cruel sport. One day you’re the best in the world and the next you’re labelled a failure, a has-been or a never-was. Ben Askren’s UFC tenure has highlighted the worst things about MMA fans. Since his UFC debut, Askren has received more criticism than anyone else in recent memory and last weekend showed fans at their worst.

Before we get into it. lets just look at Askren’s pre-MMA career. Askren was a collegiate wrestling stud, a two-time NCAA champion and an Olympian. With 91 pins, Askren was one of the most dominant wrestlers in NCAA history. Askren competed at the 2008 Olympics and was clearly an elite grappler.

Askren’s MMA rise came under Bjorn Rebney’s Bellator era and Askren looked amazing from his debut onwards. Askren’s Bellator career was highlighted by wins over Andrey Koreshkov and Douglas Lima, who recently dominated Rory MacDonald to regain the Bellator title. From Askren’s early wins it’s clear to see his talent and ability, Lima would be a top 5 UFC fighter today without a doubt.

After a fall out with Bellator, Askren found his way to ONE and went unbeaten in 7 fights there before retiring. Following a short hiatus from the sport, Askren signed for the UFC and it was there where his troubles began.

Askren’s UFC career began in a weird way, he was hurt badly by Robbie Lawler, but recovered and managed to get a bulldog choke. The referee stopped the fight assuming Lawler was out, but unfortunately he wasn’t and it looked like an error. While Lawler wasn’t quite out, it looked like he was on the verge of going to sleep. The referee’s premature stoppage started off Askren’s UFC career badly and immediately led to fans questioning his skills.

The Lawler win was the tip of the iceberg for Askren’s fan scrutiny. Following his flying knee loss to Jorge Masvidal, Askren was lambasted by MMA fans:

so glad Askren got fucking embarrassed. Absolute clown of a character who’s done nothing to justify his hype. Love that Gamebred was the one to do it to him as well.

Jorge Masvidal’s flying knee was a thing of beauty and would have put any man to sleep, but for me this did nothing to disprove Askren’s skills. One knock out doesn’t make you a hype job and I would like to think most reasonable fans would agree, but this hate Askren got this weekend was really confusing to me.

I can admit when I am wrong, Ben Askren is hot garbage. Pathetic performance

In the main event of UFC Singapore, Askren faced Demian Maia. Maia is perhaps the greatest MMA grappler of all-time, a world champion grappler in the gi and an ADCC gold medalist. When it comes to BJJ in MMA, there is no better than Demian Maia and the fact that he submitted Askren should come as no surprise.

Maia is the top of the grappling food chain and if you’ve watched Askren compete at ADCC or his rolliing sessions with Marcelo Garcia or Jake Sheilds, you’ll see his BJJ isn’t amazing.

There is no shame in getting submitted by Demian Maia, it doesn’t mean you’re a bad grappler or a complete hype job. Maia has outgrappled elite grapplers in MMA. He dominated Gunnar Nelson and tapped out Chael Sonnen. Stylistically Maia is the worst possible match-up for someone like Askren.

I think it’s premature to call Askren’s UFC career a failure, I believe there are many fighters in the top 10 that Askren could beat. Calling Askren all hype is disrespectful to Masvidal and Maia who put on outstanding performances against a great fighter.