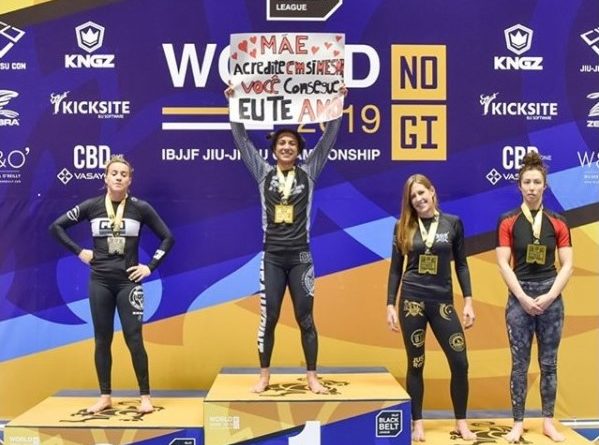 Third Coast Grappling Kumite 7 is the last event of the series that spans four months amidst a worldwide pandemic. The bracket is comprised of eight female black belts vying for the $10,000 prize. That is a powerful statement for equality in the sport. Eight world-class elite competitors showcasing the best of women’s Jiu Jitsu. This is part six of an eight-part series featuring each of the athletes in the bracket. This is Nathalie Ribeiro.

Nathalie “Tata” Ribeiro is the 2019 International Brazilian Jiu-Jitsu Federation (IBJJF) World No Gi champion at black belt. She has also earned gold medals at  UAEJJF Grand Slam (LA) as well as many more titles at the lower belts. Most notably, she won gold at both Worlds and No Gi Worlds at brown belt in 2017, as well as the Pan Ams in 2018.

Born in November, 1992, Ribeiro was always involved in athletics from an early age. She was introduced to Jiu Jitsu by her father, a black belt, and a mother who also trained. Her Jiu Jitsu classes began at age eight, but she continued to engage in other sports. She earned her blue belt at 17 in 200,9 but she stopped training after giving birth in the same year. When she resumed training after a three-year absence, she demoted herself back to white belt. This time, however, she moved to Master Sylvio Behring‘s academy, where she earned her blue and purple belts.

During a trip to the US to compete at the Pan Ams and the Worlds, she was offered a sponsorship and scholarship by the father and son tandem Master Aloisio and João Silva. She accepted and became part of the team, where she was later promoted to brown belt. A few years later, she met Lucas Leite, who offered her an instructor position at Checkmat La Habra and promoted her to black belt in 2018.