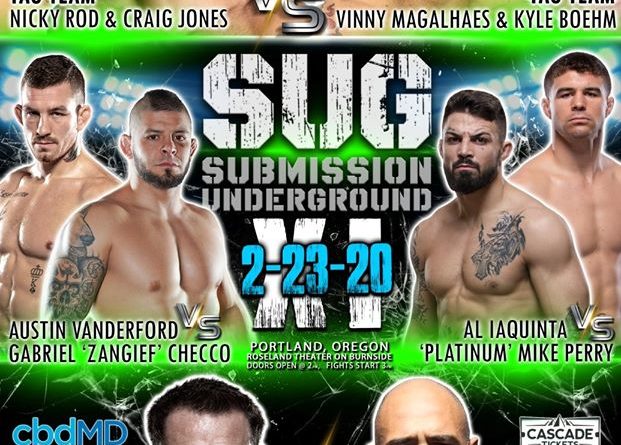 EDIT: Click here for a full and updated preview of the event.

Chael Sonnen’s baby is back. Submission Underground 11 is the promotion’s first event of 2020 and boy, is it a big one. SUG is bringing something different to professional grappling with a headline bout of Tag-Team grappling. Nick Rodriguez teams up with Craig Jones against Kyle Boehm and Vinny Magalhaes in the main event of a fantastic card with some of grappling’s biggest names present.

Originally, Sonnen put the $25,000 challenge out for any two men to beat Gordon Ryan and Craig Jones in a tag-team match. Shortly after his phenomenal run at the BJJ Fanatics Grand Prix, Boehm stepped up to the challenge. Fresh off an attempt at No Gi Worlds 2019, it didn’t take long for Magalhaes to join in the action either. Unfortunately, Gordon Ryan had to step down, but Nick Rodriguez wasted no time in taking his place alongside Jones.

Further down the card, Jake Shields makes his return to Submission Underground as he takes on one of 10th Planet’s biggest stars, Richie “Boogieman” Martinez. Bellator fighter and the man who lost to Jake Shields last time out, Austin Vanderford, meets Gabriel “Zangief” Checco while the main card is rounded out by a match between two more UFC veterans, Al Iaquinta and the never ending fountain of controversy, Mike Perry.

The Full card is yet to be announced but will contain six more solo matches either in or out of the gi including a match featuring Mike Perry’s wife, Danielle “The Platinum Princess” Perry.

Submission Underground 11 takes place on 23rd February 2020 at the Roseland Theater in Portland, Oregon. For tickets to the live event, click here.

Or, the event can be watched live on UFC Fightpass.