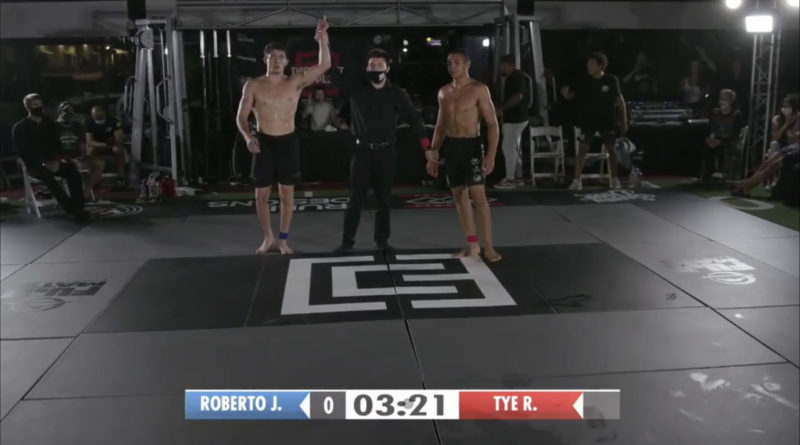 Summer is in full swing and Third Coast Grappling (3CG) is still on a hot streak.

The Kumite V: 170 lb card is as hot as the third coast in August, with big names such as Renato Canuto, the Ruotolo twins (both of them this time), and Roberto Jimenez. Most of the matches were so dynamic that the action spilled over beyond the mats several times. 3CG president Ryan McGuire even made the decision to increase the mat area going forward. In the end, the final between two grappling wunderkinds was ruled a no-contest.

Roberto Jimenez vs Hugo Marques
In what was Jimenez’s third Kumite appearance, he faced the debuting Marques in the first round. The first of this card’s young crop, Jimenez has already won a Kumite title and check. He hit two takedowns, but neither was scored because they were completed out of bounds. It was a story of dynamic scrambles all over the mats and beyond the edges and corners that ended with Jimenez outclassing Marques, 13 to 0.

Kade Ruotolo vs Vitor Oliveira
For 17-year-old Kade Ruotolo’s first 3CG appearance, he got first crack at the veteran Oliveira, also making his Third Coast Grappling debut. Oliveira scored 2 takedowns within regulation, but it went to overtime, where Kade won by decision, 2-1.

Renato Canuto vs Johnny Tama
The always game Canuto took on Tama on the 3CG mat. They made for an even match as regulation ended 0-0. In overtime, Canuto chose to start in closed guard. Canuto won by decision.

Oliver Taza vs Tye Ruotolo
In the other Ruotolo twin’s second 3CG appearance, he took on Tristar/Danaher Death Squad member Taza, who was making his maiden appearance on the 3CG mats. Tye almost closed the deal within regulation, scoring 10-0. He eventually sealed it in the overtime round, getting the golden score with a takedown.

Roberto Jimenez vs Kade Ruotolo
Fellow prodigies of the same generation, the 20-year-old Jimenez met 17-year-old Kade Ruotolo.The latter chose to pull guard and retained it for a short time, but Jimenez’s passes proved unstoppable as he knee-cut through the three-quarter guard with ease, eventually outclassing Ruotolo who tapped to rear naked choke.

Renato Canuto vs Tye Ruotolo
Scrambles were aplenty but this match ended without anyone scoring within regulation. In overtime, Tye chose to go on top and inside Canuto’s guard. There were two near back-takes by either competitor. Tye won via unanimous decision.

Roberto Jimenez vs Tye Ruotolo
Fellow prodigies of the same generation, part two — also a rematch of their first round match in 3CG Kumite III. In the match-up between the 20-year-old Jimenez versus the 17-year-old Tye Ruotolo, Ruotolo looked to avenge his brother’s loss as well as his own in the quest for the $10,000 prize. Jimenez scored a controversial and contested win via golden points in overtime.

Here’s the sequence. Jimenez went for a double-leg takedown. Tye attempted a 10-finger guillotine choke as soon as he landed in a seated position. However, to score a takedown is defined by 3CG overtime rules (as well as most organizations and promotions) as establishing control or pinning for three seconds. This was not clearly established. Ruotolo got up right away when Jimenez escaped the guillotine attempt. A few grappling veterans share their take on the matter.
UPDATE: the decision was overturned, changed to no-contest but Jimenez gets to keep the prize money.

Read the 3CG president’s posts about the controversial call:

“After conferring with people in the officiating world, reviewing the finals, and the sequence near the end that ended it we have concluded that it was NOT 2 points. Roberto needed to establish control after clearing the Guillotine which didn’t happen.
We cant put the genie back in the bottle nor can we predict how it ultimately wouldve [sic] ended but we can take responsibility for bad calls and make changes.
These athletes work too hard for matches to end that way especially finals matches. Congrats to Roberto and Tye on a great performance.
Due to the circumstances we will be declaring the match a NO CONTEST. Neither guy officially will have a Win in our book but we can’t take the $10,000 back from Roberto. It wasn’t his fault. All we can do is get better for the future, and we will. What a wild night.
What do you think? 2 points or no points? Roberto is 2-0 maybe they can run it back as a super fight next event.”

“Referee update. We are always open and transparent about things because i think thats the way to be. Our referee staff made the right call awarding the 2 points and the win to Roberto per the rules they were operating under and understood. It was discussed in the rules meeting at the event the exact scenario. Saying that though our staff and the Referees weren’t on the same page on that rule change being formally introduced. I believe Gordon Ryan asked this question in the last rules meeting and they clarified it that yes if a takedown happens and is defended and the submission clears its points no matter if there was 3 seconds of control or not. So as I said we just need to get our shit together and get on the same page. Just been a crazy few months and we apologize for the mix up. 3CG staff was there but do not recall the question which led to confusion on whether 3 seconds of control required. We hadn’t discussed it in depth or officially added it to the book like we did with the body triangle being 4 points. We still stand by the No Contest and will be revamping our protocols moving forward and creating an easy to understand rules book. The rematch can happen anytime they want. This was a disconnect between us and that happens in business sometimes unfortunately. Wires got crossed and we overruled due to our understanding of the situation but we still stand by it. We will be bringing in a very experienced Referee to oversee our officiating staff and ensure these issues don’t happen again with stakes so high. Have a great week. We are taking a couple of days and then it’s back to work. We mess up we are human but we will always own it and try to get better