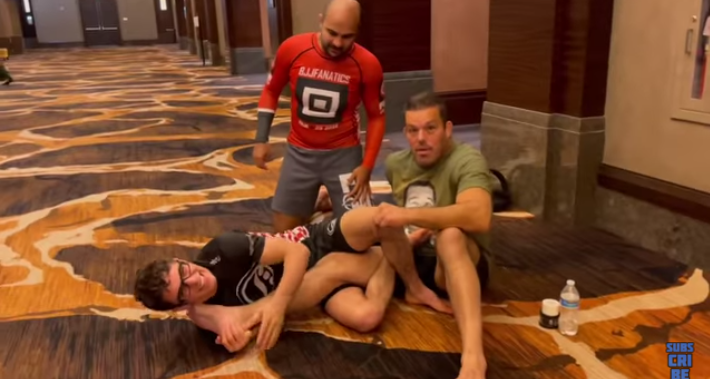 In October, Mikey Musumeci captured the inaugural Who’s Number One (WNO) bantamweight championship when he submitted Richard Alarcon using a modified heel hook. Instantly, the submission was dubbed the “Mikey lock” by Musumeci and fans, with Musumeci claiming to have invented a lock that would revolutionize leg locks.

Of course, Musumeci’s claims were met with criticism. Junny Ocasio, among others, have stated that the Mikey lock is nothing new.

In a recent video with BJJ Fanatics owner Bernardo Faria, Musumeci sat down with veteran leg locker Dean Lister to discuss the Mikey lock and the evolution of leg locks in general.

“Today we have the Mikey lock, and it’s very interesting,” said Lister. “It’s very similar, but not the same as what I’ve been doing. It’s a heel hook and I see the surface area of the body, the neck, it’s going to be a pretty cool, innovative thing as far as finishing leg locks.”

“Conceptually, Professor Dean came up with the concept of putting the big toe on the head,” explained Musumeci. “I learned this concept from him and then I developed my own position from that concept.”

Dean Lister is a two-time ADCC champion and widely considered one of the most important figures in the development of leg locks, particularly heel hooks, in submission grappling. In 2011, Lister won three of his four matches by leg lock on his way to an ADCC heavyweight championship.

After finding tons of success competing in the gi with three consecutive world titles, Mikey Musumeci has competed exclusively in no-gi this year. In 2021, he holds Who’s Number One wins over Marcelo Cohen, Lucas Pinheiro, Junny Ocasio, Richard Alarcon, and an ADCC-rules win over Geo Martinez. Musumeci’s wins over Pinheiro and Alarcon came by way of leg lock.