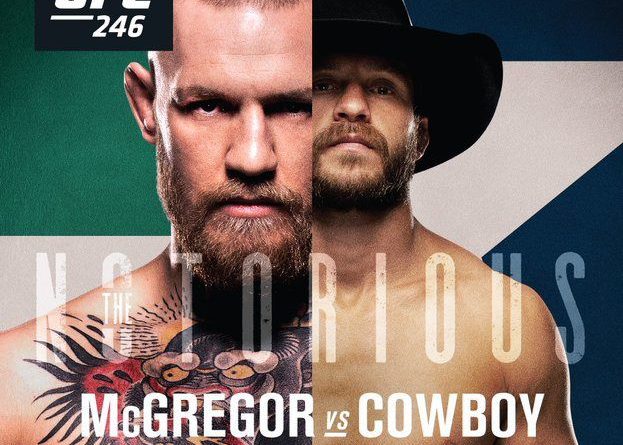 In case you’ve been living under a rock and haven’t noticed, this weekend marks the return of Conor McGregor to the Octagon headlining UFC 246. The former UFC Featherweight and Lightweight Champion is returning to Welterweight to take on veteran Donald “Cowboy” Cerrone.

While both are known to be excellent strikers, many believe the key to victory for Cowboy is determined by whether he’ll be able to take the fight to the ground. Cowboy’s impressive record boasts 17 submissions in his 36 wins, while all 4 of McGregor’s losses have come by submissions. However, The Notorious has once again been working on his ground game with Marcelo Garcia black belt and ADCC vet, Dillon Danis, in preparation for this bout.

Although McGregor suffered a submission loss at the hands of Khabib Nurmagomedov in his last showing, his wrestling and ground game has significantly improved throughout his career thus far. Whether it has improved enough to deal with Cerrone’s takedowns and slick transitions, we’ll see Saturday.

Oleinik looking for his 46th submission win at UFC 246

Another matchup on the UFC 246 main card that could potentially churn out some grappling goodness is Aleksei Oleinik vs. Maurice Greene. The former TUF contestant, is primarily known for his striking. However, half of Greene’s wins have come via submissions, including his win at The Ultimate Fighter 28 Finale, where he submitted former Olympic wrestler Michel Batista. Even so, Green is facing more than a handful when he takes on Aleksei “The Boa Constrictor” Oleinik. The Sambo expert and BJJ black belt has had 45 submission wins throughout his MMA career and recently faced off with Gordon Ryan at Quintet Ultra in a pure grappling match. In the octagon Oleinik has managed to pull of a range of rare submissions, including the UFC’s only Ezekiel choke from bottom mount.

Anthony “Showtime” Pettis also returns to square off against Carlos Diego Ferreira at UFC 246. Pettis, alongside his younger brother Sergio, has an underrated ground game, which combined with his affinity for flashy moves, has given us some great grappling exchanges and submissions in previous fights. This includes submissions wins over Michael Chiesa, Charles Oliveira and Benson Henderson.

Coming off a loss in his last bout against Nate Diaz, Pettis will be eager to redeem his reputation. However, Ferreira is no slouch and has some serious grappling credentials himself. A third degree black belt in Brazilian Jiu Jitsu, Ferreira has medalled twice at World No-Gi Brazilian Jiu-Jitsu Championship, as well as at the Pan Ams. The matchup has the potential to be a grappling barnburner.